Brandon Lafell Emerges as Our #1 Receiver

Share All sharing options for: Brandon Lafell Emerges as Our #1 Receiver 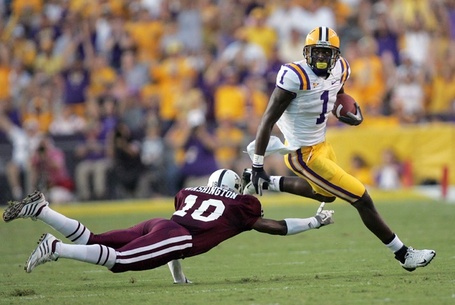 Brandon Lafell really is a #1 receiver now.  He has come so far in 3 years that it is unimaginable what he could do from here until the end of his career.  In his first year as a Tiger, he redshirted.  In his second year, he was behind Bowe, Davis, and Doucet and accounted for only 5 catches (while averaging a monstrous 28 yards per catch however).  In his third year, he put up some nice stats with 50 catches for 656 yards and 4 touchdowns, but it was marred by a mid-season case of dropsies that made many Tiger fans worry about his ability to play this game.  So far this year, he has 22 catches for 348 yards and 3 touchdowns through 4 games and there have been no signs of a drop, last night's fumble notwithstanding.

Extrapolated out to a 12 game schedule, that is 66 catches for 1044 yards and 9 touchdowns.  And with the Tiger passing game getting stronger, those could be conservative projections.

Not to take credit for myself, but here is what I posted after Jarrett Lee took a 20 yard sack and we faced 2nd and 30:  "He's calling timeout to figure out how to get 35 yards in two plays.  Hint:  Lafell."  Two passes to Lafell later, we had a first down.

Whenever people ask about Les Miles' skill as a coach, I try to point out the way he handled Lafell's drops last year.  He dropped several passes, including a disastrous drop against Auburn that ended up getting intercepted and almost cost us the game.  A lot of fans were calling for Brandon Lafell to be benched for the rest of the year.  Les Miles didn't listen.  He continued to show confidence in Brandon, and he responded by catching 17 passes with 3 touchdowns in the next 6 games, including a big touchdown catch in the national championship game.

Demetrius Byrd got a lot of the press attention in pre-season, but Lafell's the man on this team.  Opposing offenses can't cover him, and when the ball is not thrown perfectly he can go and get it.  Once he has the ball in his hands, he can turn upfield and use his long stride to great effect.  I really think he may be our best offensive player.

We'll need him to keep playing this way in the future, as it does not get easier from here.