Share All sharing options for: Around the SEC, Week 5, Part 1 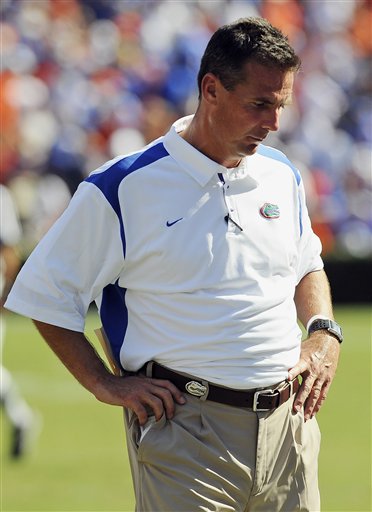 Who doesn't love seeing Urban Meyer disappointed?  I suspect even Gator fans secretly believe he's kind of scummy, and not in a cool Spurrier-style scumminess, but in a crappy, Joey Butafuoco-style scumminess.  Which is not to say he sleeps with teenage girls, because I don't know that, and that's not what I'm saying.  I'm just saying he's a different, altogether less entertaining form of douchebag.

What a week!  The SEC's depth and difficulty of schedule reared its ugly head for two teams with high hopes of being national championship contenders.  One of them lost on the dreaded 11:30am game, so often derided by many.

In a week that saw four top 10 teams get upset, three of them to unranked opponents, two of them at home, the SEC had more than its share.  It was an altogether very entertaining week of football in the conference, and nationally for that matter.  Let's get to the action.

I have said all along that I thought Ole Miss had a solid team.  Well, if Wake Forest misses a late field goal, and if Dexter McCluster holds on to the ball against Vandy, Ole Miss would be staring down the barrel of a top 10 ranking right now.  They didn't, and so they aren't, but Ole Miss proved they are dangerous and can beat anybody.

The thing is, they didn't even play a great game.  Jevan Snead didn't look nearly as good as he looked against Wake Forest.  He lost his poise against the pass rush and was a liability for most of the game, and Ole Miss moved the ball the best when he wasn't taking the snap.  Ole Miss just lined up, made some plays, gave up some plays, and in the end they were the better team.  They were helped by 3 Florida turnovers, solid production from the Wild Rebel package, and a couple of big plays from Snead (he had one big pass early, the game-winning 86 yard touchdown late, and virtually nothing in between).

OK, it took a blocked extra point and a curious decision by Urban Meyer eschew a 49 yard field goal attempt at the end in favor of a QB run on 4th and 1 1/2.  I guess Meyer was taking a calculated risk that his line could hold its own and that his man could pound out 2 yards, and that they could then either go for the touchdown or go for an easier kick.  In keeping with my support of Miles' decision to throw to the end zone against Auburn last year, I think it was probably the right call to go for it.  It just didn't work this time, but when you're losing the game with under a minute to play, you will probably be losing it at the end.  You have to do whatever you think gives you the best chance to win.

I really don't think this will look like a "bad loss" at the end of the season for Florida.  I think Ole Miss is probably a bowl team, and this may not be the only bigger-name program Ole Miss beats this year.  I look at Ole Miss and see a team that will be favored in 4 more games this year (South Carolina, @Arkansas, ULM, Mississippi State).  I for one am glad we get them in Baton Rouge this year, because this team is dangerous.

Florida gets to beat up on Arkansas next week before we get our shot at them in two weeks.

I watched this game.  The whole thing.  It was miserable.  Auburn scored 7 offensive points, getting a touchdown from the defense on a botched exchange between quarterback and running back.  Auburn won this game getting 226 total yards.  That's less than Percy Harvin had.

As inept as Auburn was on offense, Tennessee was worse.  These two teams combined for barely over 400 yards between them.  Tennessee had the decided advantage in field position for the entire 2nd half, as almost every play was run from Auburn's side of the 50, and only one time in the 2nd half did Tennessee get into field goal range.  They would routinely get the ball somewhere between the 40s and and once inside the 40 and they couldn't even get a first down.  It was a remarkable display of offensive incompetence.

For some reason, Tennessee continued to insist on Jonathan Crompton throwing the ball.  He threw the ball 23 times, seemingly almost all of them in the 2nd half, and he only completed 8 of them.  It was so bad I wonder if he actually suffered a mild concussion on a big hit he took and just continued playing without anyone realizing it.

His receivers did not help him, as more than once he put a ball where Lucas Taylor (their supposed best wideout) could have made a play to help his quarterback and he just didn't make the catch.  With a QB struggling, your other playmakers have to make a play when they get a chance.

I predicted this game would be Armageddon for whoever lost, and I stand by that.  Tennessee not only lost, but looked like they really didn't want to even be there.  At least, the offense didn't look like they wanted to be there.

Peyton Manning was on the sideline and he said the problem was that players weren't listening to the coaches.  If that is true, and if you combine that with what the coaches said was a problem with the players not showing leadership and not displaying energy, there is a real problem in Knoxville.  A problem that is being played out in a surprisingly public way.  You often hear murmurings of problems in a locker room, but now it's being said openly and for attribution by people who should know.  That's a remarkable event, and it suggests the problem is critical.

I reiterate what I said last week:

I think if I was Phillip Fulmer, I would try to identify the sources of the negativity within the team, the veterans who are not leaders, and I would separate them from the team.  Even if they're your best players.  Get them out.  Go with younger players the rest of the way, even if you have to lose a lot more games.  I can guarantee that if the problems are as bad as they're made out to be, you're going to lose more games anyway.  You'll lose to Georgia, Auburn, and Alabama, and you may lose to South Carolina and Vandy as well, if you can't correct your effort and leadership problem.

Auburn, for their part, will still have to endure some grousing, but at least they are winning the games, thanks to a defense that does not give up much.  They have a fairly light schedule by SEC standards from here until they hit Georgia on November 15.  Of course, by "light", I mean they face #15 Vanderbilt, a West Virginia team that was a national title contender last year, and the team that just beat the Florida Gators.

But still, despite learning nothing from USC, they would have gotten the right result here.  Which is not the same thing as saying "they were right."  If I say, "the sun will rise tomorrow some time around 6:00am because Apollo the sun god will at that time find favor on mankind, I would have the right result, but I'd still be wrong.

But that's not important right now.  What's important is that Arkansas is terrible, and everyone knows it.