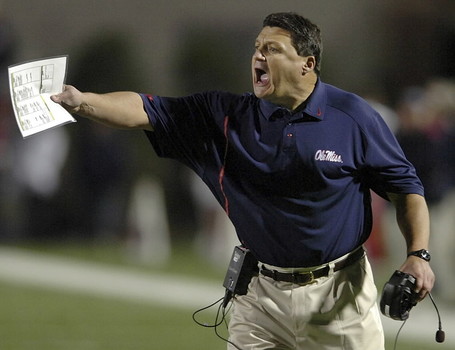 If you've been paying attention to this space, you know I wanted LSU to hire Ed Orgeron to coach the defensive line.  And word is that LSU wanted him.  And why not?  He's an excellent coach and he knows the recruiting game.  The list of outstanding defensive linemen he has coached at Miami, USC, and even Ole Miss is very long and very impressive.

Ultimately, he decided to go to Tennessee rather than come to LSU.  Immediately, Catastrophe Syndrome hit and everyone thought the sky was falling.

My first thought when I heard that he decided to go to Tennessee was, "That's not too bad."  Let me explain.

With all due respect to my friends over at Roll Bama Roll and to the Bama fans I know and like here, the fact is that Bama has quickly become LSU's toughest competition for the SEC West.  And yes, despite our highly disappointing season, I am confident that season-after-season, LSU will be contending for the SEC West.  Right now it looks like most of those years we will be competing with Bama.

This is a zero-sum game here in college football.  If you're going to have success, you're going to do it at the expense of someone else.  For every team that wins a game there is a team that loses a game.  For every team that signs a big recruit, there is a team that came in second place.  So if you want to get better, some other team or teams will have to get comparatively worse.  Bama has risen so quickly by hurting both the Auburn program and the Tennessee program, by cutting heavily into their recruiting bases.

It is well-documented that Bama has expanded its ordinary recruiting advantage over Auburn in Alabama into utter dominance, they have also gone into Tennessee.  For the 2008 class, Alabama signed 3 players out of Tennessee: Don'ta Hightower, Barrett Jones, and Chris Jordan.  Hightower was a freshman All-American at linebacker.  Jones got playing time of the offensive line.  Jordan redshirted (I think).  But Bama went into Tennessee and got a key piece of their SEC West championship puzzle, a guy who provided immediate depth, and another solid prospect.  These are guys that, all else being equal, Tennessee should be signing.

If Ed Orgeron is as good of a recruiter as everyone thinks he is, Tennessee may be able to close off the Tennessee pipeline that has already paid big dividends for Bama, and maybe even re-open the pipeline to the northern parts of the state.  By retaking lost recruiting ground from Bama, Tennessee will undo some of the things that have made Bama so strong so quickly.  They can't get Don'ta Hightower back from Bama, but maybe the next Don'ta Hightower won't get away from them.  Then, instead of having to face that player every year, they will be able to use that player against Bama every year.

And because Tennessee does not really recruit against LSU all that much (Janzen Jackson notwithstanding), it doesn't really hurt LSU to have a good recruiter in Knoxville.  Tennessee doesn't go into Texas.  Tennessee has not gotten a player out of Louisiana that LSU has wanted since Peyton Manning (and that was a special case).  We rarely go into Tennessee (we're getting Dominique Allen this year, but he is a specialty player and not really a class-maker).  We both recruit the states of Georgia and Florida, but I can't think of the last time LSU went heads-up for a recruit against Tennessee unless you count Allen.

Try as I might, I just can't imagine that Ed Orgeron being at Tennessee will hurt LSU in any concrete way.  We don't recruit against Tennessee very often (though it may take a toll on our Georgia recruiting).  We don't play Tennessee all that often.  I'm not sure when they come back around on the schedule, to be honest.  Bama, on the other hand, recruits against them all the time, and plays them every year.

All things considered, I'd rather Orgeron was at LSU (after all, strengthening LSU is a much more reliable way of strengthening LSU than harming Bama is), but I also think we ended up with a pretty solid defensive line coach anyway.  But I'd rather he be in Knoxville going head-to-head with Bama rather than in Los Angeles going head-to-head with no one we care about.

I'm not sure Orgeron can turn this thing around in Tennessee, but I have not changed my mind about him.  I think he's probably the best defensive line coach in the country, and he's a top-notch recruiter.  He'll help that program.  And helping Tennessee is good for LSU.

*I am careful to use the term "strength of the [school] program".  I'm not trying to be mealy-mouthed.  I'm trying to be precise.  I am well-aware that Bama was a much better team than LSU was this year, but I believe LSU's weakness this year was not indicative of the strength of the program as a whole.  By this I mean that even though we had an 8-5 season, I fully expect that if one were to analyze the probabilities associated with the immediate and intermediate future (or even the distant future, say, 6 or 7 years out), you would anticipate that LSU would continue to be a very strong program, based on the recruiting patterns, the coaches, and the facilities in place.  I believe that in a few years time, we will look at the Les Miles tenure and see this year as something of an aberration brought upon by a combination of circumstances outside of our control (Perrilloux) and some unwise strategic decisions that have been rectified before permanent damage was done (co-defensive coordinators).  I don't think you'll see another Perrilloux-esque problem hurt LSU nearly this badly, and it is my hope that Les Miles has learned his lessons about trying to re-invent the wheel in coaching hires.