Share All sharing options for: Big Night for Taz 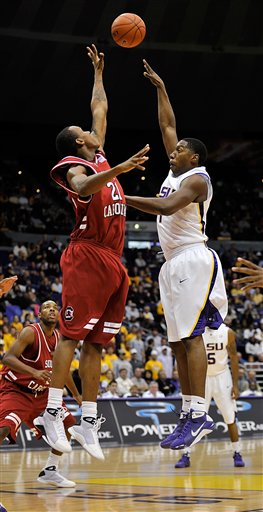 LSU got a big home win against South Carolina to stop a 2-game slide.  Because this is basketball, I did not get a chance to see this one on television, and really only know what happened through the box score.  LSU won going away 85-68.

But you don't need to see any more than the box score to know that Tasmin Mitchell had a big night.  30 points, 14 rebounds, 2 assists, 2 blocks, 1 steal.

LSU's defense frustrated South Carolina, as the Gamecocks shot only 44% from the field while getting 10 shots blocked.  They also shot miserably from the foul line, missing 14 of 22 free throws.  If South Carolina makes some free throws and we don't get those blocks, this could have been a whole different basketball game.

But they didn't, and we did.  LSU jumped out to a big lead pretty early, and South Carolina never got closer than 10 points behind in the second half.

Chris Johnson, despite his early foul trouble, had a pretty good night with 9 points, 6 rebounds, 4 assists, and 4 blocks.  He actually led the team in assists last night.  Led the game, even.  He seems to be finding his game again, and if he gets going inside this could be a pretty good team.

Lest we neglect to mention, Garrett Temple also had a nice stat line.  9 points, 7 rebounds, 3 assists, 3 steals, 1 block.  I don't know who he was matched against defensively, but star guard Devan Downey struggled from the field, hitting 7 of 19 shots, including only 4 of 14 from inside the 3-point-line.  He had 18 points, but with hi taking so many shots and being their best player, that's not bad.

This was Taz's night, though.  A career night.  A career high in scoring, a double-double, and he was a 5-column producer on the stat sheet.  He played 37 minutes and only picked up 3 fouls.

I like it.  Next, we get Ole Miss at 3:00pm on Saturday.  I don't know if there's any television coverage.