Lafell Declares for NFL, But Leaves Door Open For Return

Share All sharing options for: Lafell Declares for NFL, But Leaves Door Open For Return 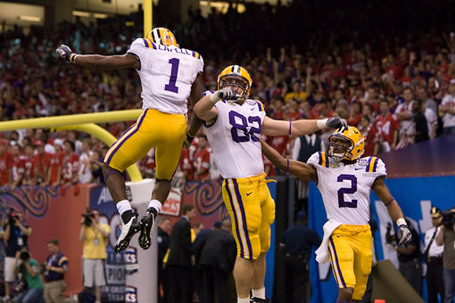 LSU wide receiver Brandon Lafell has declared for the NFL draft, but in reality all he has done is he has kept his options open for the next few days.  The deadline for underclassmen to declare for the NFL draft was yesterday, January 15.  However, so long as a declared underclassman does not hire an agent, he has until Sunday to withdraw his name.  Lafell made clear at his press conference that he is not hiring an agent.

It sure would be great to get Lafell back.  I really think there is another untapped level to his game.  In 2006, he was behind a lot of great receivers and was waiting his turn.  In 2007, he had a nice year, but it was marred by a mid-season slump characterized by terrible drops.  In 2008, his production was very good, but he was a victim of subpar QB play.  He's an outstanding talent, better than most give him credit for.

Does everyone realize that even with really shaky quarterback play throughout the year, he still hauled in 63 receptions for almost 1,000 yards?  Does anyone realize he led the league in receptions?  That he tied for the lead in touchdown receptions?  That he was 2nd in the league in receiving yards, both accumulated and per game?  That he scored twice as many touchdowns as Julio Jones, while making more catches for more yards?

Think what he could do if LSU had consistently good quarterback play.  While other receivers on the team struggled to produce because of weak QB play, Lafell still excelled.

I'm not getting my hopes up, even though Lafell was very clear that he is purposely leaving the door open for a change of heart.  I don't know what his draft prospects are, but he definitely has NFL size at 6'3" 210#, NFL athleticism (see picture above), and you can't fault his production last year under difficult circumstances.  His hands have been suspect, but he definitely improved in that area from 2007 to 2008, and for every drop he makes, he makes a great catch to make up for it.

I don't think the NFL will be salivating over him like with, say, Michael Crabtree, but so long as he runs well at the combine there is a place for a 6'3" 210# athletic wide receiver who runs good routes in the NFL.

If Lafell decides not to return, LSU is left with a void at receiver.  There are a lot of young receivers on the team, but LSU would be left for the first time in recent memory without an experienced and productive wide receiver returning to the team.  The most productive returning wide receiver would be Terrance Toliver, who has all the talent in the world but only has 32 catches in his career, which is just over half of what Lafell got last year.

There would be a lot of room for young receivers to step up and become key players for this team.  Receivers like Deangelo Peterson, redshirting receivers like Tim Molton, Chris Tolliver, and Jhyryn Taylor, and incoming freshmen like Kenny Bell, and maybe Rueben Randle and/or Deangelo Benton.  The opportunity to step up is there with or without Lafell, but there is a gaping chasm without him.