Share All sharing options for: The Very Strange Circumstances of Dexter Pratt 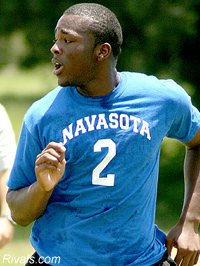 There are a lot of rumors going around about the Dexter Pratt situation.  None of it is good, but not all of it is hopeless.  I'll give you the rundown.

Dexter Pratt was an early commitment to the 2009 class for LSU.  He is out of Navasota, Texas, which is pretty close to College Station.  He's listed as an "athlete", but most see him as a running back.  As a runner, he is very reminiscent of Charles Scott.  He's big and strong, with good hands out of the backfield.  He lacks elite speed, but he can get around just fine.  What's more, he is a good student who was reportedly all set to start school this month at LSU and be there for Spring Practice.

I really like him as a prospect, and while he is unlikely to be an instant impact player, he's a very solid recruit of whom big things can be expected eventually.

Well, he got to LSU to report for classes, but his paperwork was not in order.  He was not cleared by the NCAA Clearinghouse.  The inner workings of the Clearinghouse are murky, and I do not fully understand them, but I will explain it as best I can.

A school may not give a player financial aid based on a football scholarship unless and until his academic credentials are approved by the NCAA Clearinghouse.  The Clearinghouse looks at transcripts, test scores, and the high school's curriculum to see if everything measures up.  They look for things like test scores that greatly increase from one attempt at it to the next, an excess of correspondence or remedial course work, or inaptly named high school classes (for example if something is labeled Algebra II but really only teaches remedial math, the student may not be given credit for having taken an advanced Algebra class).

The process takes time, and I understand it is up to the kid's high school to get all the paperwork in to the Clearinghouse to start the process.  In Pratt's case, supposedly his paperwork was not cleared yet.  The same thing happened to Patrick Johnson (now Patrick Peterson) last year, and he was not able to enroll at LSU for Spring.

What happened after Pratt reported to Baton Rouge is the source of much speculation and we won't get into that.  The end result is that Pratt is now back in Navasota and is seriously reconsidering whether he really wants to come to LSU at all.  After a few days of speculation, he took a visit to Oklahoma State and is now listed as a commitment to them.  LSU holds out hope of convincing him that whatever his problem at LSU was would pass.

When asked about what happened at LSU, I got the impression he got to Baton Rouge and then felt remorse about being so far from home.  I think the Clearinghouse issue gave him an out to reconsider the whole thing.

When all is said and done, we will probably end up losing Dexter Pratt, which would be a real shame.  He looks like a pretty good player.  We'll know for sure in a couple weeks.