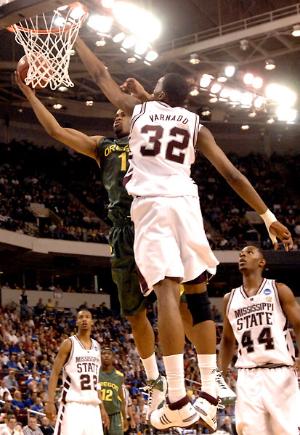 Sometimes, ESPN makes it REALLY easy to mock them.  For instance, there was that whole "Who's Now?" fiasco from a while back ago.  Well, in a lesser sin, but no less mockable, ESPN is actually having Bracketology segments in mid-January.  They even hired a guy named Joe Lunardi to run it.

Leave it to ESPN to take a borderline worthwhile concept (prognosticating what a committee will do) and taking it to an absurd extreme.

Anyway, that is neither here nor there, as this is to talk about Mississippi State, who LSU will face in the PMAC on Wednesday night.  The Bulldogs sit at 3-0 in the conference and 13-5 overall, with losses to Washington State (who LSU beat), Texas Tech, Charlotte, Cincinnati, and San Diego.  None of their OOC wins really stick out at me, but I'm not sure you can say they have any bad losses either.

This is another team that LSU matches up decently against.  They lack beef inside, as they sport a 6'9" beanpole at center in Jarvis Varnado.  He's a really good player, but if he was 250# instead of 210# I would say we were in real trouble.  He's a shot blocker and a good scorer, but he doesn't have the strength or the girth to manhandle our interior players like, say, Patrick Patterson at Kentucky will.  Chris Johnson and Quentin Thornton will have their work cut out for them, but he's not going to be able to just push them around.

Interestingly, Mississippi State does not have any player who averages significantly more than 30 minutes per game.  Their best player, Varnado, averages only about 27 1/2 minutes per game.  You can expect the Bulldogs to run about 10 players in and out of the game, with backups getting about 30% of the minutes.  At least, that's how it has averaged out over the whole season, but you see elements of this in conference play as well.  In 3 conference games, Jarvis Varnado has played 30, 27, and 25 minutes, and you can only say he had foul trouble in one of those games.

Personally, I am of the opinion that in college basketball, unless you are playing an up-tempo style like those great Arkansas teams from the 90s or the Loyola-Marymount teams from the late 80s and early 90s, you should stick with your best players in college basketball as much as their foul situation will allow.  If you're playing half-court basketball, I see no reason why your best players can't go 37 or 38 minutes in conference so long as they stay out of foul trouble.  And I see no reason why you should put in a lesser player if a better one is not in foul trouble and not tired.  But that's a rant for another day.

As a result of the Bulldogs' lengthy bench, they have really balanced scoring.  Four players average in double figures, lead by Varnado at 12.6 ppg.  Ravern Johnson is a significant deep threat, as he actually shoots better from outside the arc (48.3%) than he does overall (47.6%).  As a team, they will jack it up.  They have 360 three-point shot attempts, versus 254 for LSU, and I would say we throw up a fair number of 3-pointers.

This should be a pretty good game between two fairly evenly matched teams.  Seeing as how it's in the PMAC, I guess it's one we need to win.  Once again, I'm not sure if it's televised.