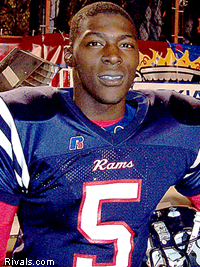 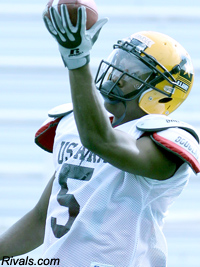 We now sit officially two weeks away from National Signing Day, and it is a very hectic run-up this year.  Unfortunately, LSU seems to have lost a little momentum to this point, but that's only if you believe in "momentum" in recruiting.  I personally do not, but it's hard to ignore the fact that most of the big news to come out of the LSU recruiting season lately has been bad.

First, there was the news that wide receiver Andre Debose, who will be a contributor in 2009 wherever he goes, will be going to Florida unless DJ McCarthy can pull a rabbit out of a hat and get him to change his mind.  This came on top of news that we had lost a lot of ground with linebacker Jarvis Jones out of Georgia.  Both of those guys were considered heavy LSU leans at one time.

Second, there was the news that struggling long-time LSU commitment Deangelo Benton (above, left) would not be ready to enroll at LSU for the Spring and would try again in the Summer.  Benton is an outstanding wide receiver prospect who, for a variety of reasons, is on his third year of trying to get qualified.  If we can ever get him in, he will likely be an immediate contributor.  He has the size and the hands to be an NFL wide receiver and many people thought he was better than Terrance Toliver was in 2007.  He's been away from organized football for a little while, but so was Chad Lavalais before he finally made it to LSU, and Lavalais ended up an All-American.

Then the whole Dexter Pratt saga hit, and I have rarely seen such a dramatic turn in recruiting.  The kid actually reported to LSU, got some bad news about his eligibility for early admission and not only returned home but was committed to a new school within a week, a school that also would not be able to enroll him early.  I am very curious to know what else is going on here, but LSU is barred from speaking out about recruits until National Signing Day, which is in two weeks.

LSU has 4 or 5 spots left in this class, and it does not look like we will be getting any more of the out-of-state big name guys, though we are still going to try to win back Andre Debose, Dexter Pratt, and Trent Richardson.  We are also going to try to convince uncommitted out-of-state players Sam Montgomery (pass-rushing DE) and Darren Myles, Jr. (free safety) to commit to us.

Despite our struggles to win out of state recruits down the stretch, which really shouldn't be a surprise, as most recruits ultimately decide to stay close to home, we are doing pretty well with the national-level recruits who reside within the Louisiana borders.  Current commitment Janzen Jackson, a guy who has gotten a lot of media attention because he appeared to be wavering for a little while, appears to be more solid than ever.  People are getting more and more confident about 5-star wide receiver Rueben Randle (above, right), and this story is sounding more and more like a re-play of the Julio Jones recruitment all the time.  Julio Jones was quiet, did not give a lot of interviews, looked around all over the country, made the fans of the home team very nervous, and by the time National Signing Day rolled around it was pretty obvious to everyone he was staying with the home team.  With two weeks to go until decision day, Randle is very much on that same path.

We also appear to be on track to get a commitment from 4-star linebacker Barkevious Mingo, one of the better names on the recruiting trail.  Mingo has long been rumored to be a heavy LSU lean, but he's been taking his visits and seeing other schools.  All indications are that he'll be ready to make the call when the time comes.

There are more spots available than just those two, and LSU continues to look around for some people to take those spots.  Some players have had "greyshirt" offers and may get those upgraded (personally, I am not fond of greyshirts, but that's another post).

It will be an interesting couple of weeks.  This is a huge weekend for visitors, as it seems like 15 or so guys will be there, including Rueben Randle, Sam Montgomery, Janzen Jackson, and Trent Richardson.  More later.