Share All sharing options for: LSU 81 - Mississippi State 57: LSU is Making a Move 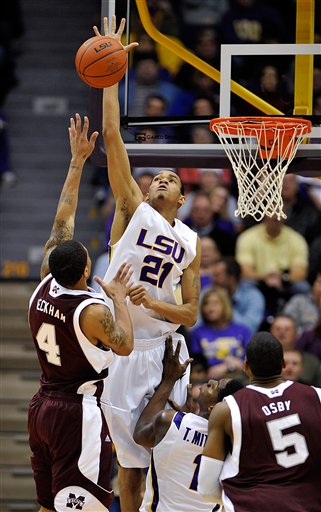 LSU rode a monstrous second half to an easy 81-57 win over Mississippi State last night.  A relatively close game was broken open by an offensive explosion by Marcus Thornton, who scored 17 points during a 7-minute stretch early in the second half in which LSU outscored Mississippi State 31-9.

It marks the third straight blowout win in the conference for LSU, coming off of 17- and 32-point victories over South Carolina and Ole Miss, respectively.  It also propels LSU to the top of the SEC West at 3-1.  Technically, we're tied with Mississippi State, but we win the head-to-head there.  With Mississippi State and Florida both losing, Kentucky is the only remaining unbeaten team in the SEC.

That's also 3 straight games of 80+ point performances.  Tonight, the offense was led by Marcus Thornton's 31 and Taz's 24.  No other player was in double figures for the Tigers.

For the Bulldogs, Jarvis Varnado got his points (18), but once again he only played 25 minutes despite not being in foul trouble.  He was only called for two fouls tonight.  You have to wonder why their coach consistently leaves their best player on the bench for more than 10 minutes a game when he doesn't really get into foul trouble very often.  You can guess part of it tonight was the fact that the game was out of reach with 10 minutes to play, but Varnado made a basket with under 5:00 to play, so it's not like he sat the whole second half.

Though Varnado got his points, the Tigers did an excellent job of limiting the other areas of his expertise.  Jarvis Varnado is averaging almost 10 rebounds per game, and over 5 blocks per game, but only had 4 rebounds and 0 blocks.  Chris Johnson and Quintin Thornton combined for 15 rebounds and 2 blocks.  They only got 6 points between them, but our '5' position held its own against one of the best post players in the conference.

The centers dominated the boards for LSU, and it showed on the box score.  LSU out-rebounded MSU 40-23.  In fact, Varnado's 4 rebounds was actually the high for Mississippi State.  No one else got more than 3.

And once again, it is time to give a shout out to Garrett Temple.  While the offense was a two-man show tonight, and Garrett only chipped in 4 points, he does everything else for this team, and his contributions need to be recognized.  He grabbed 8 rebounds, got 6 assists, 3 steals, and 1 blocked shot while avoiding turnovers.  I'm sure he also had a hand in the Bulldogs, normally a "bombs-away" team, hitting only 5 of 20 from 3-point-range.

This was a dominating performance from a team that is starting to look like one of the best in the conference.  Sure, Ole Miss is not a very good team at all, and South Carolina is nothing special, but Mississippi State is supposed to have been a good matchup for us.  While Varnado lacks bulk, there aren't a lot of players in the SEC as good as he is at blocking shots, getting rebounds, and getting points.  At this point, I would say that really only Kentucky's Patrick Patterson is a better post player.  Our recent ability to play even with good players in the post has been the biggest factor in this surge, I think.

Let's keep it up.