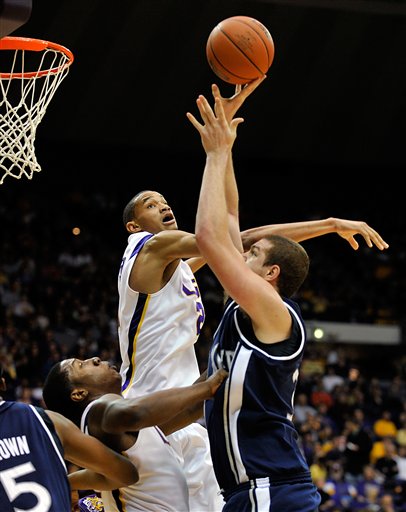 Poseur was right.  It was a double-digit loss, but I honestly believe that if we played Xavier 10 times, we'd probably win about 4 of them.  We played this team very well, and if not for that horrible cold shooting stretch in the second half and the free throw contest at the end that extended Xavier's lead, this would have been a very close game that either team could have won.

The picture above was chosen purposely, though.  Xavier centers Kenny Frease and Jason Love combined for 22 points on 10-of-13 shooting, and honestly I think they could scored just about any time they touched the ball if Xavier had wanted to press the issue with them.  Xavier's big centers were able to do exactly what I feared they'd be able to do.  They out-muscled Chris Johnson and scored easy baskets virtually at will.  They got Chris Johnson into foul trouble early as well.

I do not understand why Xavier didn't go to them more often.  Their size down low was their biggest advantage in the game, and it just seemed like they were farting around with their perimeter players.  Fart around they did, however, and it allowed us to stay in the game, and even enjoy a few leads until we went on an awful 9 minutes cold spell where we did not hit a shot except for some free throws.

What happened on the cold spell?  Well, to give Xavier credit, they did not give us any easy shots during that stretch.  Everything was either a long 3-pointer or a heavily contested interior shot.  We also took some bad shots too early in the possession.  We had a couple of ill-advised, contested 3-pointers with plenty of time left on the shot clock, when we would have been better off working the ball around a little more.  But they weren't all low-percentage shots.  We got some nice looks on 3 pointers and while our interior shots were contested, some were quite makable.

So, the reasons were a) good Xavier defense, b) poor LSU shot selection, and c) bad luck.

The amazing thing to me is that we were still in the game when the cold streak ended.  We were behind the 8-ball and looking for a dramatic turnaround, down by 9 before Johnson's dunk ended it, but despite going over 9 minutes without a field goal against a highly ranked team, we were not run out of the gym.  We continued to play good defense and kept scrapping.

I think that's the key take-home message of this game.  The team kept fighting, and the commentators were right to point out that this is a key difference between this LSU team and the LSU teams of recent years.  This team won't fold when the other team wants a dog fight.  They will hustle and play physical and display a toughness which was lacking in prior LSU basketball teams.  It has paid off so far in conference play, and it could pay off if we make it to post-season as well.

In a side note, it also would have been a very different game if Taz hadn't struggled so much from the field.  He was 5-of-17, and missed a lot of the kinds of shots he usually makes, like little running hooks and fall-away jumpers.  He may have struggled with Xavier's length and athleticism, as Taz was never a superior athlete even before he blew out his knee, and now he is almost exclusively a below-the-rim player.  He has a variety of ways to get the ball to the basket, but last night his shots just weren't falling.

Once again, it's what could have been.  A win last night would have been huge for this program, in front of a sell-out crowd in a nationally televised game.  Still, we acquitted ourselves well and I'm darn proud of the team.  If only we had gotten a couple more bounces go our way.