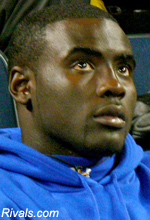 With signing day just over one week away, we are going to start focusing just a bit more on recruiting here at ATVS.  This past weekend was a big weekend for the finishing up the 2009 recruiting class, which will sign next Wednesday.  The Tigers hosted top targets Rueben Randle, Trent Richardson, Sam Montgomery, and Kendal Kelly, as well as a bunch of already-committed recruits and one player who was hoping to get a full offer.

Bennie Logan of Red River High School in Coushatta, Louisiana had gotten a "greyshirt" offer.  To recap, the term "greyshirt" means that the player will not enroll at LSU in the fall, but will wait until the following December to enroll in school and will count towards not this current signing class but rather to the next one.  Les Miles had promised Logan that he could enroll in the 2010 class if he wanted, but Logan had offers from schools like Texas Tech and Nebraska to enroll in the Fall, and while he wanted to go to LSU, he was unlikely to wait a year when he had other solid programs who wanted him now.

LSU, for its part, appeared to be hoping that Defensive End Sam Montgomery from South Carolina would fill out this class's needs at defensive end.  Montgomery is a very solid pass-rushing specialist, the kind of player the team lacks among young players, especially if Chancey Aghayere continues to struggle with injury.  Bennie Logan is more of a combo defensive end, smaller than the run-stopping Tyson Jackson but not lightning quick like Rahim Alem.  If you want to compare his STYLE of play, he probably compares favorably to Kirston Pittman.

Logan is listed at 6'3" 235# on Rivals, but is listed at 6'2.5" and 245# on Scout.  Word on him is that he is a bit of a late bloomer.  One of the troubling aspects of the modern recruiting arms-race is that it forces teams to act earlier and earlier in the recruiting cycle in order to get on the right players.  These days, a lot of teams have most of their class committed at least 6 months before signing day, before these guys have even begun their senior years of high school.

What is in some ways a guessing game, then, becomes a guessing game where you're making your guess when the players are at an even lower stage of physical development and emotional maturity than they were even a few short years ago.  Imagine if you had to be evaluated for aptitude in your current profession when you were a junior in high school?  This state of affairs means that late bloomers are often find that their schools of choice are full-up by the time they emerge as serious players.

In Logan's case, in viewing his junior highlight film, you see a nice player.  He's big, he's stronger than anyone else out there, as is typical of major college recruits.  You just don't see any wow factor there.  You don't see much of anything that makes him stand out from all the dozens of other very good high school players who don't draw much attention from the LSU's of the world.  LSU stayed in touch, but did little else as Logan began his senior year.

Then, Bennie Logan played his senior year.  He got better.  He got stronger.  His senior film was significantly better than his junior year film, but was this just a product of him being not only the strongest and fastest player on the field, but also the most experienced?  It's hard to say.  He went to LSU on an unofficial visit (where the prospect pays his own way) late in 2008, and according to published reports, "he looked the part."  That is to say his body developed and he starting looking a lot like a college defensive end, bigger, stronger, more defined.  One can guess he's probably bigger than his listed 235# or 245# now.

LSU got more interested.  We had one defensive end committed to the 2009 class, Texas's Michael Brockers, and we were still looking at Sam Montgomery to take the other spot, as he is an outstanding prospect and a rare and valuable pass-rushing specialist.  Logan got more love, but he still wasn't at the top of our board.

Well, the LSU coaches must have decided either that Montgomery was unlikely to leave the Carolinas (as has been widely expected to be the case) or they decided they can afford to take 3 defensive ends in this class, as they finally made a full 2009 offer to Logan during his official visit.  According to Dandy Don, he accepted it and will be a part of this 2009 class.

I think it's safe to say that Logan's going to need some more time in the strength and conditioning program, and I would not expect him to be an instant impact player with players like Sidell Corley, Rahim Alem, Pep Levingston, Chase Clement, and others on the roster.  If he works hard though, and keeps developing, he could be a gem.