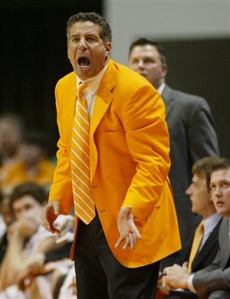 LSU faces off against Tennessee in Knoxville on Wednesday night at 7:00pm on a game televised on Raycom Sports.  It's split coverage, with another game also being covered at the same time, so I honestly don't know if I'm going to be able to watch this one.

Tennessee is not the team they were a year ago.  They really miss Chris Lofton Jajuan Smith, their two leading scorers who both moved on to the professional ranks.  Chris Lofton was one of my favorite players, as he had the ability to just light it up from long range and bury you with shot after shot.

The 2007-2008 Tennessee Volunteers were a deep team with a variety of weapons and scorers.  The 2008-2009 Tennessee Volunteers are struggling.  They shoot 30% from behind the arc and lack a real backcourt scorer.  Some of their better players tend to get in foul trouble.  They've already lost 6 games, including some not-very-close ones.  This is an eminently beatable team.

What they do have is an inside presence that will give us trouble.  Wayne Chism is a big, somewhat beefy post player, the kind who was able to push Chris Johnson around against Xavier.

Their best player is swingman Tyler Smith, who is a beanpole like our players at 6'7" and 215#.  He's mainly a slasher, as he hits only about 25% from long range.  He's the only Volunteer averaging 30 minutes on the court per game.  I think between Garrett Temple and Tasmin Mitchell, we match up pretty well against him defensively, but I'm sure he'll get his points.

To give Tennessee credit, they've played a lot of tough teams out of conference.  They've played Gonzaga (twice), Georgetown, Temple, Marquette, Kansas, and Memphis.  The problem is they've only won 2 of those 7 games.  I like the schedule, and honestly I wish we would play more like that (more on that another day), but this is not at all the out-of-our-league team that Tennessee was a year ago.

It's in Knoxville, which is of course going to be a problem.  It's hard to win on the road in the SEC, but it's hard for everyone.  This is one that would be a great one to get, and if we can figure out how to handle Wayne Chism inside and keep him from getting a bunch of easy buckets, I really think we can win this one.  Getting him in foul trouble would help.  He averages a foul about every 7.3 minutes on the court.  That's why he averages only about 24 minutes on the court per game.  If we can keep him on the bench, we have a real good shot here.