Trent Richardson to LSU Has Always Made Sense To Me

Share All sharing options for: Trent Richardson to LSU Has Always Made Sense To Me 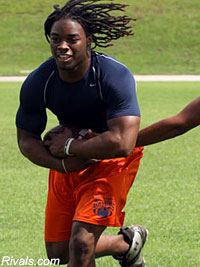 Richardson is a very good back.  He is both quick and very, very strong.  He's a power back, but also with a few moves in his arsenal.  Think Lebrandon Toefield, without the knee injuries.

Word came out on Monday that Trent Richardson may be ready to sever ties with Alabama and narrow things down to LSU and Florida.  Dandy Don reported a "feeling" that Richardson would come to LSU if Rueben Randle would as well.  A lot of people have a little fun at Don Long's expense, but I can tell you from my couple of years of approximately daily blogging that the occasional poor spelling and bad grammar happens to everyone who puts out a lot of words in a little time, and Don's been right at least as often as he's been wrong over the years.  He has good information, and he gives it out free to anyone who wants it.  He's alright in my book, but that's another story.

I have always thought that it just made sense that Trent Richardson would want to come to LSU.  I can think of several reasons why:

Second, keeping with the 'proximity to family' theme, Richardson has a brother on the football roster at UL-Lafayette.  He'll have a family member pretty close by, and how much do you want to bet that Trent Richardson's mother could find a nice job in the Baton Rouge area if she was looking to relocate closer to both of her sons?  Not that I'm suggesting anything.  I'm just sayin'.

Third, LSU's running back situation is a good one for a young running back to jump into, if you're willing to be just a little patient.  Yes, we have a senior All-conference player returning in Charles Scott, but after he leaves there is no one there who has locked up the job.  Richard Murphy will be a senior in 2010, but is coming off a very unproductive 2008.  Stevan Ridley looks promising, and everyone seems to love him, but he hasn't locked up anything yet.  Those are the only experienced underclassmen on the roster at running back, so you get one year to learn under an experienced leader like Scott, then the opportunity to win the starting job.  No one's going to hand it to you at LSU, but they won't at Bama or Florida either.  Bama has sophomore Mark Ingram returning, and he has already proven himself to be able to be productive in the SEC.  Plus, they seem to have recruited about 1000 running backs in the last few years.  LSU has signed one running back since the 2006 class.  Florida has 3 experienced running backs who will be either sophomores or juniors in 2009.

Fourth, LSU's returning offensive line looks really solid.  LSU has 3 starters returning, and solid depth.  Bama returns only 2 starters, and loses their two best offensive linemen in Antoine Caldwell and Andre Smith.  And whether it's representative or not, the play of the Alabama offensive line without Andre Smith was absolutely horrid.  Florida also has to replace 3 starters, but they looked pretty solid through injuries, so I would call that a push between Florida and LSU, with Bama in 3rd place on that factor.

Fifth, I really think Florida is a poor place for a skill player to go to if his goal is to prepare for the NFL.  They emphasize getting players into open space so much that I can't help but think that NFL scouts will shy away, as the NFL is a much more high-traffic league.  If you don't get to practice playing in traffic, how can you be evaluated?  LSU plays more of a pro-style game where a running back will get thekinds of carries he'll see in the NFL.  Bama plays the same way, and I'll give them a push on this factor, with Florida in 3rd place.

I don't know what Richardson will ultimately decide to do.  I'm sure he'll be productive wherever he goes.  It's just always made sense to me that he would choose LSU.  I'm not saying it will happen, and I'm not saying I have any inside knowledge on the situation.  I may even be playing a game of "wishful thinking".  We'll know in a week.