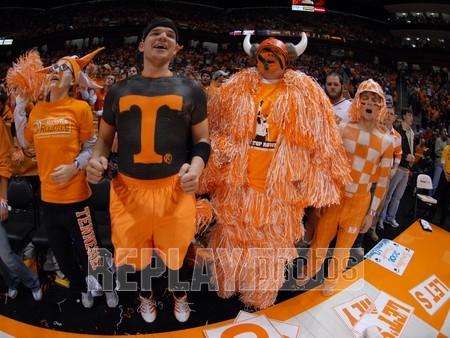 First, some of you commenters are freakin' nuts, but I did enjoy the discussion about pom-poms and jorts in the entry below this one.

Huge win for the Tigers last night.  It looked for a while like we would win in a walk, but after another second half freeze-out shooting the basketball, Tennessee made a run at it, but in the end we pulled away.

Once again, Marcus Thornton led the way offensively with 29.  It is unbelievable how much better of an overall player he is from last year.  The announcers were right.  Last year, he was all about jacking up the 3.  This year, he goes into the paint a lot and scores.  He plays defense well.  Not just passably, but well.  He's cut down (but not eliminated) the ill-advised shot.  I'm not sure there's a better overall player in the conference.

Chris Johnson played his best game as a Tiger, scoring 14 huge points, grabbing 14 huge rebounds, and blocking 4 huge shots, all while mostly staying out of foul trouble.  He wasn't the high scorer for the team, but he got some enormous points, including hitting both ends of a 1-and-1 that put us up by 3 with under a minute to play, points that put a lot of pressure on Tennessee and that ultimately started the ball rolling on us pulling away from the Vols.

Shortly before hitting those free throws he got a big block on a shot that could have been the go-ahead basket for the Vols.  Tennessee really struggled with interior offense most of the night, thanks in no small part to Chris Johnson.

Of course, Tennessee shot lights-out from behind the arc, hitting 8 for 19, and even that was only because they missed the last couple.  Tennessee had been hitting only 30% from 3-point range this season, but their 3s kept them in this one when it was looking like we were pulling away from them at several points in the game.

LSU built a big lead, going up by as much as 14, but you just knew Tennessee had a run in them.  And they gave it to us, by playing good defense and hitting shots.  Once again we helped them by taking bad shots early in the shot clock.  The difference between this game and the Xavier game is we started the cold streak with a big lead and were still very close when it was over.

Credit the Tigers with continuing to play hard even after losing that big lead.  Once again, the team showed toughness.  They showed mental toughness by battling back and not folding after Tennessee took the lead, and they showed physical toughness by staying with Tennessee when the game got really physical.

Speaking of physical, I will say that I think we got the better part of a poorly officiated game.  Yeah, some silly calls went against us, but more silly calls went for us than the other way around.  JP Prince was called for a phantom foul on a bad 3-point shot, and Wayne Chism was called for a phantom goaltend, giving us a total of 4 points we didn't earn.  There were many others.

But, them's the breaks.  The officiating was bad, as the game was called close for a while, and then the refs let both teams get away with anything and everything except backing into a player in the post.

LSU is now 2-1 on the road in the SEC, and that is outstanding at this stage.  It's hard to win on the road in this conference and we've done it in two places, including in one place that we would have expected to be a very difficult place to leave with a win.

Saturday we get Arkansas at home.  This team is totally schizophrenic, with two wins over top 10 teams, but losers of their first four conference games, all but one of which by double-digits.  They play Bama tomorrow, and we get them on less than 48 hours rest.  Advantage us.