Share All sharing options for: Craig Loston: An Early Start to All-Star Weekend 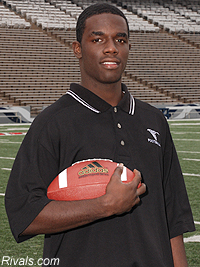 I reported yesterday that Craig Loston would in all likelihood announce his commitment to LSU at the Under Armour All-American Bowl on Sunday evening.  I was a little off.  He decided to announce his commitment on Friday afternoon, during the Skills Challenge.  While the timing of his announcement was a surprise, the substance of that announcement was not.  He announced to LSU with his cousin Russell Shepard looking on.

Loston is a great athlete.  He can run.  He hits hard and tackles well.  He has good ball skills.  He passes the eye test with flying colors.  At the UA All-American Bowl, he is going against other Division 1 athletes and other 4- and 5-star players.  Word is that while he has a very high ceiling, he may be a little behind some others in his technique, and therefore may need a bit more coaching at the next level to reach his full potential.

As a football player he is perhaps a little raw, and may need some time before he's ready to contribute as a safety.  I would imagine with his speed and tackling ability he will be an instant contributor at least on special teams.

He still has a little work to do in the classroom to get eligible, but most people believe he is not so far away to be worrisome.

I think he projects as a strong safety, good against the run while also providing help to the corners in the passing game.  I don't think he's quite good enough of a cover guy to isolate one-on-one against a wide receiver.  He definitely separates the receiver from the ball with his hits though.  He's a Ronnie Lott-type safety in that respect.

This is another 5-star committing to the Tigers, and it may not be the last of the weekend.  It is going to be a very interesting 4 1/2 weeks to National Signing Day.

At some point, we will have a long post about what Loston's cousin Russell Shepard has meant to this class.  It was Shepard who is primarily responsible for Craig Loston being a Tiger.  Shepard may be primarily responsible for a number of other great athletes ultimately being Tigers.  Time will tell.  This afternoon is when William Campbell announces his commitment.  It may or may not be to LSU.

Below is a YouTube of Loston.  Personally, I think there are better highlight videos for him out there, but this is the best one that is available to the public.  The first half if offense, then defense.