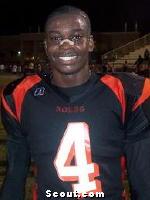 LSU got a little bad news on the recruiting trail this weekend, as lineman William Campbell of Detroit ultimately chose Michigan after saying earlier in the week he had eliminated Michigan from consideration, and Florida receiver Andre Debose, who I had previously told you was widely believed to be coming to LSU, chose to be a Florida Gator.

It would have been nice to get either one of those guys, but Campbell would have been just a bonus.  A week ago, no one thought there was any chance he was coming to LSU.  Then, the noise that he might got louder for a while.  Then, he decided not to come to LSU.  It would have been a great get, but it's hardly a bad loss.

Losing Debose hurts, though my understanding is that the coaches aren't ready to give up on him.  Andre Debose is a guy with a high upside, but he's also a guy who I think is going to be a contributor from day one for whatever team he goes to.  That's a pretty rare find.  Most kids need a little seasoning before they're ready to contribute.  Debose's skill set (great quickness and speed) along with his good hands and his "slot receiver" build seem to indicate, to me at least, that this is a kid who's going to be dangerous from the start.

Everyone says "Harvin" about Debose, but I really see him more as a Tyrone Prothro.  The difference is that Prothro was a pure receiver, where Harvin in a hybrid receiver and running back.  Harvin's an athlete playing on offense, but Debose looks to me like a receiver, which suggests a very high professional upside, but maybe I'm not the one to judge.

Ultimately, I think Debose just chose to stay close to home.  I think the take-home lesson is that we should not count on an out-of-state guy until he publicly announces he's coming here.

Still, despite the disappointment of not getting Debose, we have to look at All-Star weekend as an overall success.  We got a commitment from a five-star safety in Craig Loston, and then he went out and made a couple of highly athletic plays in the game (including getting a 15-yard-penalty for late hit out of bounds on his cousin and future teammate Russell Shepard).  Josh Downs looked incredible playing defensive tackle for the Black team in the UA game.  Chris Faulk looked good playing guard for the West team in the Army All-America Bowl.  Rueben Randle (who I believe will ultimately sign with LSU) was the most productive receiver in the US Army game, despite playing hurt.  Chris Davenport had a slow game at defensive tackle, but reportedly looked good in the Army practices.

And then there's Russell Shepard, who of course we're all keeping an eye on.  He played quarterback for the Black team at the UA game.  He had a 92-yard pass play (to Andre Debose), had a couple of electrifying runs including a touchdown run, but also made some errors including committing a fumble that was returned for a touchdown.

The clear impression on Shepard for me is that he has a lot of ability, but even if he has progressed as a passer in the last year, he still has a ways to go.  He can throw the ball just fine.  He had more than one solid, accurate pass in the game.  He has a good release and appears to have decent mechanics.  He just needs a LOT of polish in his decision-making.  His fumble came because he held the ball too long before either getting rid of it or taking off and running.  One or two other times, he took off running too soon.  These are the sorts of things that can be corrected with time and practice, but I emphasize that in no way is Russell Shepard ready RIGHT NOW to be a starting quarterback for LSU.  I think he's ready to run a specialized package of plays (including passes), but handing him the reins of the offense would be a bad idea at this point.

Some people think he will end up moving from the quarterback position to receiver.  He may one day do that, but he shows enough promise as a quarterback that that is not necessary right now.  Leave him at quarterback and run a specialized playbook for him until he develops.  If he hasn't made progress as a quarterback in a year or so, move him permanently to receiver.

Sometimes people don't realize how much these kids, even the best of them, still have to learn to master the college game.  It is not at all easy to play the quarterback position in college.  The defenses are more complex and more athletic than anything these kids saw in high school.  The reads are harder.  The pressure is greater.  The playbook is bigger.  And last but not least, these kids are no longer the best athletes on the field (most of them).  It's not easy to step out there on the field with older players who were all just as good as you were in high school and beat them.

We look ahead now.  This recruiting class, even without Debose, looks absolutely outstanding, arguably the best in the country and it could keep getting better in the next 4 1/2 weeks until National Signing Day.  A number of great players are still looking at LSU, and six or seven great ones will be enrolling later this week, in time to come to Spring Practice.  More on them later.

The coaching search has taken a lot of twists and turns since we last revisited it.  We will get into that later this week.