The Coaching Staff Is Finally (Apparently) All Set

Share All sharing options for: The Coaching Staff Is Finally (Apparently) All Set 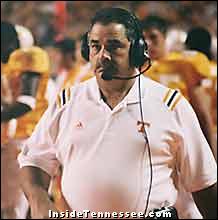 After weeks of having very little information that did not turn out to be complete garbage, it appears the 2009 LSU coaching staff is finally settled.  LSU finally named John Chavis as the defensive coordinator, a move that had been apparently done for a while.  While Chavis had been set about a week ago, we had no idea who the other three coaches on the defensive side of the ball would be.

But, we weren't done.  According to The State, a Columbia, South Carolina newspaper, LSU has hired former South Carolina defensive backs coach Ron Cooper to be the new defensive backs coach for the Tigers.  And also, according to the Chicago Sun-Times, former Chicago Bears defensive line coach Brick Haley has been hired to be LSU's defensive line coach.  We'll have more on these hires tomorrow.  If LSU retains special teams coach Joe Robinson (again, more on this later), the coaching staff is set.

Now for a long diversion.  If you don't want to hear a lecture on how coaching staffs are put together or a rant on the fact that there are so few dedicated QB coaches in college, skip ahead past the italicized text.

Note 2:  No offense to tight ends coach and recruiting coordinator Josh Henson, who appears to be doing a very good job, but I would MUCH rather see LSU have a dedicated quarterbacks coach than a dedicated tight ends coach.  Let the OL coach and/or the WR coach handle the tight ends.  The quarterback position is the most important on the field.  It's a little crazy that very few teams have a coach dedicated to working exclusively with that position.  It is a job traditionally handled by the offensive coordinator, who is also busy drawing plays, installing a game plan, and working with the other coaches.  Every team should have someone coaching quarterbacks, teaching technique, teaching footwork, teaching defensive reads, and everything else that goes with it.  Sure, that position coach would end up being responsible for only a handful of players while other position coaches are handling a dozen or more players, but these are the MOST IMPORTANT PLAYERS.  It's worth it.  And it's not like the tight ends coach has a whole lot of charges either.

Still with me?  OK, we know Chavis is the man for the defensive coordinator position.  As discussed before, we at ATVS think this is a very good hire.  It's really almost impossible to argue with the selection.  Sure, I think hiring a rising star like Dewayne Walker would have been the sexier choice (he turned us down, if you believe the rumor mill), but Chavis is a guy whose defenses are always, always, always good.  Even this year, with an absolutely awful offense that put him in tough spot after tough spot, his defense gave up a total of 14 touchdowns on the season.  Our offense gave up half that many.

If there is one knock on Chavis, it is that he is not an eager and energetic recruiter.  Let's clarify something about this topic, however.  I follow recruiting pretty closely.  I enjoy it.  I think it's a very important topic.  A lot of people, myself included, tend to overstate the importance of recruiting.  We tend to look at everything through the recruiting lens, and that's just too much emphasis to place on one aspect of their jobs.  Yes, everything starts with recruiting.  Yes, recruiting is the lifeblood of a program.  There's just a lot more to a coach's duties than recruiting, and a lot more that is required for a program to be successful.

No high school player comes to college not needing to be coached.  Every one of these players has a long way to go before they're truly ready to compete and succeed in the SEC.  The coaches not only have to get the players to campus, but they also have to coach them up and put them in a scheme to succeed.  As a defensive coordinator, Chavis's most important job is to be the X's and O's guy.  It's much more important to put these guys in a scheme that will work for them than it is to get one or two more better athletes.

Chavis may be an indifferent recruiter compared to some others, but it's not like he doesn't do it.  He has been out on the recruiting trail for the past couple of days, in fact.  I just don't think he's going to be a Larry Porter or a DJ McCarthy or a Bradley Dale Peveto logging thousands of miles traveling hither and yon.  And frankly if Chavis is also going to be responsible for coaching linebackers, I think that's plenty enough responsibility for one person.  A defensive coordinator is too important of a tactician to spend all of his time and energy on recruiting, and adding the linebacker duties to that makes it even more forgivable that he is not all that much of a recruiter.