Share All sharing options for: Ron Cooper and Brick Haley 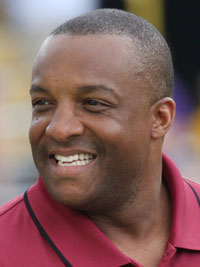 Ron Cooper's been around a while.  He's spent his entire career at the college level, and was the youngest African-American head coach in college football history when he was named head coach at Eastern Michigan at the age of 30.  He's also been head coach at Louisville and at Alabama A&M.  He's been a defensive coordinator at Mississippi State, coached cornerbacks at Wisconsin, and has been a defensive back coach at Notre Dame.

This guy is a veteran, to say the least.  A bit of a journeyman, but what college coach isn't?  Well, John Chavis for one, but there are not really very many.

Plus, South Carolina's players have gone on to have success.

While I can't say that Ron Cooper is a familiar name to me, it's clear to me upon looking at his history that he is legit.  For what it's worth, USCe fans lament his departure, and consider him to be one of the most important coaches the Gamecocks have.  They say he is one of their best coaches and is their best recruiter.

Yes, I know we've been over the recruiting thing.   We should avoid overstating the importance of recruiting, but that is not the same as saying recruiting is unimportant.  It is very important.  It's just not the only important thing a coach does.  Cooper seems to excel at recruiting.  He is all over the Gamecock commitment lists for the past several years, despite appearing to recruit almost exclusively outside of the Caolinas.  He gets most of his recruits from the state of Georgia, so he may be able to keep the recently-opened Georgia recruiting pipelines open for LSU.  This avenue was opened by Bradley Dale Peveto, and has given us a number of solid recruits in the last few years.  Cooper may be tasked with keeping that window open.  He's also recruited Alabama, Virginia, and other states.

Brick Haley is another veteran coach who has been around.  A couple years ago, he was a hot young defensive line coach in the NFL.  His unit did not have a lot of success in Chicago this year, and word is Lovie Smith was ready to see him go so he could hire his old buddy Rob Marinelli, formerly of the 0-16 Detroit Lions, to take over the defensive line.  Before his 3-year stint with the Bears, Haley had been the defensive line coach at Mississippi State.  He's also coached at Georgia Tech, Baylor, Troy, Houston, and Austin Peay.  He was defensive coordinator at Baylor and Troy.

It's been a couple years since Haley was in the college ranks, but he is another experienced SEC coach.  He's coached a number of very productive SEC defensive linemen, including Titus Brown, Michael Heard, and Willie Evans (sack machines, all).

Haley didn't go from genius to fool in one year.  The Bears defensive line degraded for lots of reasons, one of which being a rash of injuries.  Anyone who lasted 3 years coaching defensive lines in the NFL knows a little bit about the position.  Even if his time in the NFL was less than great (and Chicago's defense was excellent for a while), remember that he was good enough of a college defensive line coach to merit a promotion to the NFL.

I think Haley is another upgrade from a coaching standpoint on what we've had at the position lately.  As a recruiter, he's a bit of a mystery to me.  It's a little hard to find records of his recruiting assignments at Mississippi State, and it's unclear how to interpret that data anyway even if you could get it, as MIssissippi State has always been a tough sell to recruits.  As a defensive line coach, Earl Lane did not sign a lot of recruits, but he was essential in signing a number of very important ones, including Patrick Peterson and Joseph Barksdale.  It is unclear how Haley will replace that.

Interestingly, both Cooper and Haley are originally from Alabama, and both played at Alabama A&M, where John Chavis coached.  These guys all know each other and hopefully that means that the coaching chemistry will be there from the start.  I am very excited about this defensive coaching staff, and it is helping me to grow very optimistic about the immediate future of the LSU program.  I think we're going to see a more aggressive, more attacking defense in the future.