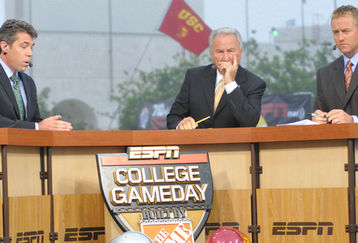 It's #1 vs. #4, and the latest rumors, as collected by Team Speed kills, is that Tim Tebow is IN.  We'll have to see.  The rumors are that he's still affected by loud noise, and I'll refrain from making comments about the noise level in Tiger Stadium, but if he's still affected by loud noise then he is most certainly not "asymptomatic."  But I'm just a lawyer in Alabama.  What do I know?

We've also got the ESPN GameDay crew on hand, all for what is in many ways a glorified exhibition game that is not particularly important for either team's long term goals on the 2009 season.  It is a rivalry game, however, and bragging rights are important.

GameDay is an insufferable entity.  Their stories are formulaic pablum, a mix of soft-focus human interest stories and fawning pieces on successful coaches and players.  It spends much its time with a handful of teams, some of whom like Notre Dame are not even particulary successful.  It is good publicity for LSU, though, and ESPN is stil pretty much the 500 pound gorilla of college football.  I'll probably be off doing something else between 9:00am and 11:00am today.