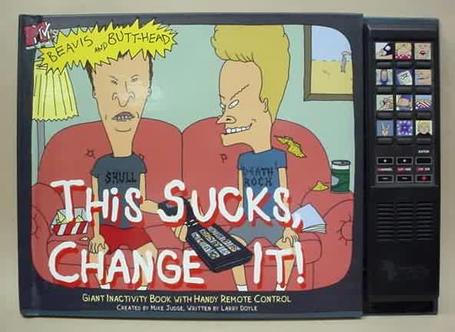 Yes, I had juvenile tastes in television when I was younger.  Heck, I'd watch B&B today if it came on and my wife would let me.

I don't think I need to say just how appalling those statements are.  The first one, you almost have to wonder if the person is even aware of what that sounds like.  (For the record, I think Chris Garrett could be better than Matt Flynn, but Flynn also did not really get his chance until his 5th year, while Garrett is a true freshman).  The second one is simply overwhelming in its brazen lowness.

This has long been one of the difficulties in covering LSU athletics.  It seems like every time something goes wrong, the LSU equivalent of a few thousand Trogdor the Burninators come out from under  and rampage through the countryside.  I always wonder if other schools have these types of fans too.

Yes, it was a poorly played game for our offense.  No, Jordan Jefferson did not play particularly well.  And it is correct that it is difficult to mark any improvement in his play from the beginning of the season to now.  Do I think another QB should be given a chance?  I'm not sure on that yet, but I am definitely thinking about it.  Jefferson's play wasn't all bad.  He had a good completion percentage, which would have been reduced if he'd thrown the ball away when he needed to.  He had some nice runs.  Except for that miserable 3rd quarter, his play could be considered unspectacular but competent.  The third quarter, not so much on that second adjective. (Grammar is for snobs).

My point is, fans should keep criticisms of players constructive.  It's a little different when talking about coaches, who are grown men making tons of money to do what they do.  Players are working hard, putting their bodies and their health on the line for comparatively little.  Keep your comments above-board when talking about a player.  When talking about a coach, just remember that they have families and loved-ones too, but I am also mindful that coaches know exactly what they're getting into when they sign on for the coaching life.  It's hard to say the same of an 18-year-old kid who signs scholarship papers.

One of the things I like about the little website we've built up here is that our readers are above that sort of thing.  Even CFB, whose relentless pessimism drives some people a little crazy in the game threads, at least keeps his comments on a plain significantly higher than what I see elsewhere, and isn't making his points through personal insults.  While I don't advocate relentless pessimism as a way of life, if you're going to do it, you should at least do it right, which CFB does.

That's just to cite one example.

So yes, let's discuss the issue of Gary Crowton's job security.  It's hard to say last year was a success for his offensive system, and this year the offense has looked downright pitiful at times.  All the while, we are wondering why a dynamic player like Russell Shepard is getting so little playing time.  On the other hand, he is just 2 years removed from a national championship season in which the offense was outstanding.

I am open to the idea of making a change at the end of the year, but I am undecided on the matter.  Except for the wide receivers, it is hard to point to any unit of the offense that hasn't struggled to maintain a high level of play so far this season.  Then again, this is a team that is 5-1 and the only loss was a reasonably close loss to one of the 5 best teams in the country.  The second half of the year could go either way at this point.  We have winnable/losable games all through the back half of the schedule.  If the offense improves, the sky is still the limit for this team.  If it doesn't, this team could be looking to the Independence Bowl.  Or anything in between.

We just don't know at this point.