Share All sharing options for: ATVSSECOSPPOW: Week 6, All Apologies

OK, first off, I am terribly sorry.  This has been a bad week for blogging, as I have been working longer hours than I like working, and I have had some family obligations after work.  As a result, my blogging has been severely curtailed this week.  I have not even gotten an ATVSSECOSPPOW out for this week.  I apologize to you, the reader, for my lack of getting this thing done.  That starts correcting now.

This is really a fantastic week for the And The Valley Shook SEC Offensive Speed Position Player of the Week contest.  There were good performances in several games, and multiple players would have been worthy winners.  We could have gone with Mark Ingram, who had 186 yards of total offense, mostly on the ground.  We could have gone with Tim Tebow, who returned from a serious injury to lead his team to victory, though he did not accumulate especially eye-popping statistics.  We could have gone with either Stephen Garcia or Alshon Jeffery of South Carolina.  Garcia threw for a 10.1 yard average with 3 touchdowns and 1 interception, while Jeffery caught 7 passes for 138 yards and 3 touchdowns. We could have chosen Ryan Mallett, whose Arkansas team scored a big win, and who accumulated close to 300 yards of passing offense.

We did not go with any of those individuals.   Instead, we're going with someone I never would have thought would be mentioned in the same breath as the ATVSSECOSPPOW (never mind that ATVSSECOSPPOW is more than one breath itself). 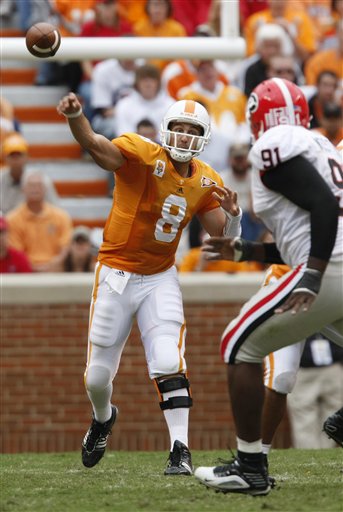 That's right.  It's Jonathan Crompton, he of the often mocked lack of productivity.  Well, he has really had a fantastic 6 quarters of football lately.  In Tennessee's big upset of Georgia, Crompton was 20 of 27 for 310 yards, 4 touchdowns, 1 interception, and he was not sacked.  That's a great day for a quarterback.  That's an ATVSQBPI of 13.3 yards per touch.

Yes, there's a certain novelty in picking a guy like Crompton, who has genuinely had terrible production for a season and a half.  He earned it though.  He had a genuinely great game, with the highest yards per attempt in the conference and 4:1 TD:Int ratio.  He was a cut above the other winning quarterbacks, and while both Ingram and Jeffery would have made fine winners, we had to go with Crompton here.

Even if he tanks the rest of the season, you can't take this past week away from him.