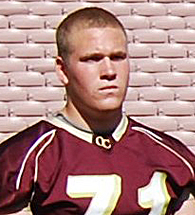 
I haven't posted in a while, but I feel this is worth posting.

Marsh is a talented defensive tackle from Westlake Village, California.  Marsh has a four star rating from Rivals.com, and he is ranked 13th-best among defensive tackles nationally.  LSU's depth at defensive tackle is talented, but thin, so Marsh's commitment is big news.

It is rare for LSU to grab a player from California.  Marsh comes from Oaks Christian High School, a super-powerhouse program.  Notre Dame's Jimmy Clausen went to Oaks Christian.  Cassius Marsh is teammates with Nick Montana, the son of NFL Hall-of-Famer Joe Montana and a QB commit for Washington.  Nick's backup?  Trevor Gretzky, the son of Wayne Gretzky.  And Nick throws passes to Trey Smith, the son of Will Smith (the actor, not the Saints' DE).

Plenty of schools wanted Marsh.  He held offers from just about the entire Pac-10, including USC.  He also got offers from Oklahoma and Tennessee (recruited by Ed Orgeron).  LSU beat USC, UCLA, Oklahoma and Coach O for a DT in California.  Not an easy feat.  Major props to the recruiting staff.

Marsh is an outstanding athlete.  He's listed at 6-3 and 275, and he runs the 40 in 4.9 seconds.  More importantly, he's quick off the ball.  He's also very strong.  It is common for LSU to take defensive tackles and turn them into offensive linemen, but I believe Marsh will stay at DT.

LSU is thin at DT.  Right now we have a rotation of 4 DTs, and two of them are seniors.  Next year, we return Drake Nevis and Josh Downs.  Chris Davenport is redshirting, and will probably see lots of playing time next year.  Marsh could slip into LSU's DT rotation right away next season.