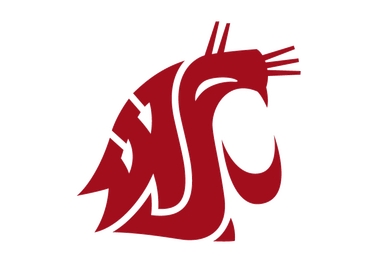 Rawr.  I've always thought this was an awesome logo.

Washington State is led by the nation's third-leading scorer, Klay Thompson.  Thompson is averaging a whopping 24.9 points per game, thanks to a phenomenal .470 mark from behind the arc.  This should raise questions about our perimeter defense, which got embarrassed against Arizona State.  Reggie Moore is a talented freshman point guard who also chips in 12.6 points per game with a solid .385 mark from the arc, and he could punish us if we focus on Klay too much.

The good news is that the Cougars are a "short" team, and few of their main contributors are big men.  That could help Taz and Storm do their thing, but can they defend Wazzu's multitude of guards as well?

No more pussyfooting with in-state "rivals".  The real season's about to begin, for both us and for them.  Wazzu and LSU are in the same boat.  Wazzu has beaten all of its inferior opponents, like LSU has, but their only two legitimate opponents, Gonzaga and Kansas State, have given them their only two losses.  Same with LSU.

The Cougar Hardwood Classic will be held at the Key Arena in Seattle tomorrow at 9 PM Central Time.  Sadly, no TV coverage that I know of.