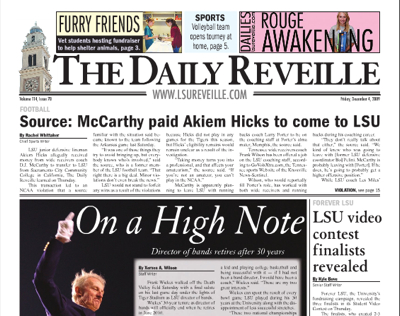 On Friday, The Daily Reveille ran a story reporting that according to an anonymous former player, the violation currently under investigation involves McCarthy paying DL Akiem Hicks money to transfer to LSU. The former player also claims team members learned of these details after last Saturday's game. The story was the front page headline on the print version, which you can read here. The story was then retracted from the online version of the paper without explanation. My own sources at The Rev claim that the story was pulled not due to concerns about the source, who they claim is credible, but due to a point of policy about asking the AD for comment before printing stories about violations.

Whether The Rev's source truly is credible probably can't be determined until LSU's final report on the investigation. It wouldn't be the first time a college paper has made a bad judgment call. An official explanation from The Rev won't be coming soon either, as fall classes are now over and the university has entered the concentrated study period.

If the source proves to be true, the results of the investigation will still only have a minor impact. Hicks did not play, so no games will be forfeit, and if Miles did not have knowledge of the incident then only McCarthy is likely to face punishment from the AD. Since LSU is self-reporting the results of this investigation, the NCAA's punishment is also likely to be low-impact.