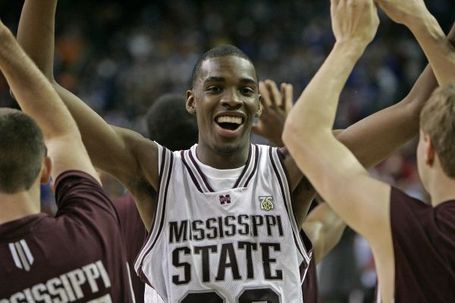 The strange thing is, for all the talk of how weak the SEC West was, this division just might have the two best teams in the conference.  LSU and Mississippi State are both playing very well right now and honestly I have a hard time deciding who is the better team.

This may be the biggest game of the season for LSU so far.  It's a big game, but it is laden with opportunity for LSU to make some huge strides on reaching its goals this season.  It's a conference road game against a tournament-calibre team, so the opportunity is there to build a tournament resume.  I think a win here would put us on pace to be a comfortable tournament team.

Also, because LSU won the opening game between these two teams and because LSU is a 1-loss conference team while MSU is a 2-loss conference team, a win against on Wednesday for LSU would give us a huge cushion in the SEC West.  This will be our 9th game of conference season, leaving 7 left after this.  If we win, we are two games up on the second place team in the West with the tie-breaker in hand.  We would in reality be 3 games ahead of our closest divisional competition with 7 games to go.  Only 2 of those 7 remaining games would be against tournament level competition (Kentucky and Florida).

And that, of course, highlights the danger of this game.  We are winning the SEC at the moment, but we don't have a lot of good wins.  We've beaten MSU once, and we've beaten South Carolina and Tennessee, who are also tourney-calibre teams.  We beat Washington State.  Other than that, that's it.  We lost to Utah, to Xavier (though not a bad loss, we didn't get the win), and to Texas A&M.  We don't exactly have a killer resume at the moment.

Our best resume item is that we're winning the SEC West (and the SEC for that matter) and we're really hot right now.  A loss to MSU would take both of those items off our resume.  With a loss, we'd fall into a first place tie with the Bulldogs for the West, and if Florida beats Kentucky tonight we'd be in a 3-way tie for the conference lead.  We'd be back into a fight for the conference and division. We also wouldn't be "hot" anymore.

And you can't look at this game and say that we have any clear advantage.  Don't be fooled by our crushing home win against them in January.  Outside of a bizarre, inexplicable loss to Ole Miss on January 31, Mississippi State has been just as good as we've been lately.  They beat Kentucky a week ago, matching our win against Tennessee.

Last time, Jarvis Varnado had a nice night despite playing only 25 minutes.  I didn't understand last time why they don't play him more minutes, and I still don't understand it today.  He's a killer.  His 7 blocked shots against Kentucky last week were soul-crushing.  He single-handedly stopped Kentucky's rally from behind and ended that game by blocking shot after shot.  He also averages double-figure points despite his excessive time on the bench.  If I was coaching MSU, this guy would play 35 minutes a game or more unless he had foul trouble.

When not feeding the ball to Varnado inside, the Bulldogs will jack up just about any 3 in sight.  In the last 2 games (both wins), they have made a total of 30 three-point shots.  In that same time, LSU has only attempted 31.  On the season, MSU has attempted 491 three-points shots to LSU's 357.  They're making them 38.7% of the time, while we're making them 37.8% of the time.

Their most dangerous shooter is Ravern Johnson, who is making 47% of his 3-point attempts, and is 14 of 24 in his last 3 games.  He also leads MSU in points despite being shut out against Arkansas.  He was the other half of the Johnson-Varnado tandem that crushed Kentucky.  While Varnado was blocking the shots, Johnson was hitting 5 big three-pointers.

MSU will be out for revenge, and they're a good team playing at home.  This promises to be an exciting game, and if LSU can pull it out, it will be our biggest win of the year so far.