Share All sharing options for: Don Yanowsky: An Editorial 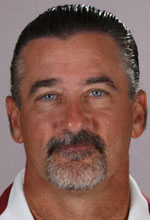 LSU announced that Don Yanowsky will be the new tight ends coach and recruiting coordinator at LSU, replacing Josh Henson who left the team to coach the offensive line at Missouri.  And there was much hew and cry around the internet about this hire.

And hey, let's face facts.  Don Yanowsky is not a very photogenic person.  I'm sure that's what everyone's upset about.

Oh, so that's not what people are upset about?  Well, what are they upset about it?  [pauses].  Are you kidding me?  They're upset because he's not an "exciting" hire?  What tight end coach and recruiting coordinator could we possibly have hired who would have been "exciting"?  I have never in my life seen or heard of a tight ends coach who got a fan base fired up by his mere presence on the payroll.

Yanowsky is a veteran coach with 20 years of experience.  He has coached seemingly every position on the field, from special teams to defensive line to offensive line to outside linebackers to tight ends.  He was most recently of Boston College, where his tight ends were very productive (73 and 34 receptions in the last two years, for 719 and 269 yards and 5 and 2 touchdowns).  His players got it done on the field.  What's the problem?

Alright, alright.  Enough fooling around.  Some people in some corners of the internet are disappointed that we didn't hire a young dynamic recruiter to replace Henson, who was young and an eager recruiter.  But what exactly do we know about Don Yanowsky's recruiting. According to Rivals, he signed two guys last year, both 2-stars, one from Illinois and the other from Georgia.

Boston College is not a hotbed of recruiting.  Never was.  Never will be.  The New England area produces very few D1 prospects, and they have to make their living going into the midwest, the southwest, and the southeast to get their recruits.  How do you think Boston College does when they go into Georgia or Texas and tries to recruit players the big schools want?

They also suffer from the recruiting services' regional biases, which seems to greatly favor prospects from the southeast over prospects closer to BC's home.  Before Yanowsky was at BC, he was at Duke, East Carolina, and Arkansas State.  Also not places where coaches have regular opportunities to recruit 4- and 5-star athletes.

Remember also that Yanowsky did not finish the 2009 recruiting season at BC.  He resigned after Jeff Jagodzinski was fired.  But look at what Yanowsky did in the 2008 recruiting class.  He is credited with signing 5 players, 4 of them 3-stars, 3 of them out of the state of Texas.  He signed players on both sides of the ball, and signed both big and small.  By Boston College standards, that is not bad at all.

The year before, he signed 4 players, most of them 2-stars, and 3 of them from Florida with one from Virginia.