The Recruitment of Bryce Brown

Share All sharing options for: The Recruitment of Bryce Brown 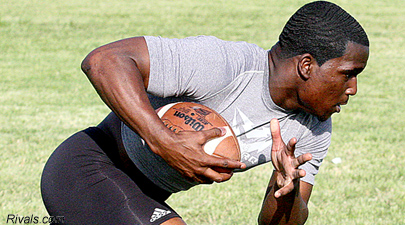 We thought the 2009 recruiting season was over.  We were wrong.  LSU has one more recruit they're trying to convince to jump on board.  His name is Bryce Brown, and he is a running back out of Wichita, Kansas.  He is great.

He is the #1 player in the 2009 class, as determined by both Rivals and Scout.  He played in the US Army All-American Game and was by far the most effective skill player there, scoring two long touchdowns on long catches.  On one of those touchdowns, he beat LSU signee Barkevious Mingo in coverage, and beat him badly.  And Mingo's a really solid prospect.  Brown's just that good.  And when I say he was the most effective skill player there, please remember that Rueben Randle was there.

From a talent perspective, Brown would be one of the centerpieces of this class if we signed him, along with Russell Shepard, Craig Loston, Chris Davenport, and Rueben Randle.  He would be an immediate contributor even in a backfield with a lot of veteran talent.

Which brings us to the down side.  First, and most importantly, despite a lot of positive talk, I still think it's very unlikely he signs with LSU.  He is currently "committed" to Miami, but he put off his signing beyond signing day and the rumors say that he and Miami have completely severed ties.  But that doesn't mean he's going to LSU.  That just means he's looking around, and while he says nice things about LSU, his words are, "LSU is definitely in the running for my final visit."

Hmm?  We might get his final visit?  Well, it's better than not getting any visit, but the important part is the part that's left out.  He doesn't say we're definitely in the running "for his signature."

There's reason to be hopeful that he's serious about us.  If you're a young back, you have to like what LSU has to offer right now.  We have two senior running backs plus a senior specialty back in Trindon Holliday, then a couple unproven players and an incoming freshman.  Among elite programs, you aren't going to find a more inviting running back depth chart.  Also working in our favor is the fact that his brother, linebacker Arthur Brown, seriously looked at LSU last year and reportedly held us in second place to his ultimate destination, which was Miami.  He's reportedly on the outs with Miami and may end up transferring wherever Bryce goes.  He liked LSU then, why not now?

He is reportedly also seriously considering Oregon and Tennessee, and possibly others as well.

Then there's the other downside.  Like with his brother Arthur before him, Bryce has an "advisor" handling his recruiting.  This "advisor" is not a family member.  He is a guy whose connection to the Brown family is...  mysterious, perhaps is the best way to put it.  He seems to have put a lot of time and effort into the Browns in the last few years, and if anyone has said how the guy makes an actual living, I have not seen it.  It smacks of "agent-in-waiting" for a future NFL prospect.  Or perhaps he's looking for a quicker return on investment?

I could be wrong about that, but a lot of people sure have suggested it.  Les Miles did not seem put off by it when he was recruiting Arthur, and he does not seem put off by it with Bryce either.  For all that Miles has a reputation as a riverboat gambler, he has not appeared to be reckless on the campaign trail (or on the football field, but that's another story).  I seriously doubt Miles would conduct recruiting the way he conducts it and then play ball with a guy who everyone is looking to catch taking money from boosters.

The other issue with the handler is what would happen if and when Brown actually comes to LSU.  Would he interfere?  As for this, I agree with Bayou Bengal Blog on the subject:

I'm not going to sit here and say that this guy doesn't have the potential to bring baggage with him. If I'm Miles and Brown does decide to come here for a visit on the 28th and we have a sit-down, one of the first things I'm going to say is that while I appreciate the hassle of the recruiting process and I think it's great he found a guy like Butler who could help him with it my interest is in Bryce Brown and not Brian Butler, and I'm not taking any phone calls from the latter. LSU players don't have handlers and that's not going to start with Bryce Brown. If the response is "no problem coach," then we're in business. If it's "he goes where I go" or anything along those lines, then I shake the kid's hand and wish him well at Tennessee or Miami or Kansas or wherever the hell he wants to go. There's your acid test.

It's simple.  Do your due diligence.  If you sense the handler is going to be trouble after Bryce is enrolled, then say "thanks, but no thanks" and concentrate on recruiting Lache Seastrunk for the 2010 season.  If you sense the kid knows the score and knows he has to be as dedicated to the team as his teammates are, we could be in business.