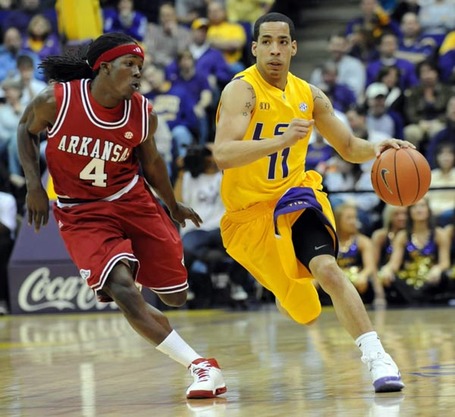 I fully expected Arkansas to be without their most dynamic offensive player, freshman point guard Courtney Fortson, but they caved on their "indefinite suspension" pretty quickly.  Fortson is a very good player at the point, though he is young and somewhat reckless.  He's Arkansas's most creative player, leading them in assists.  He was suspended from the team for some violation of team rules, or perhaps just to teach him to be a better team player.  Until his suspension, he was Arkansas's second leading scorer and led the team in minutes played at 32 per game.  In fact, even after serving the first game of his suspension on Saturday, he is still the team leader in minutes played with 712.  Second on the team is Stefan Welsh at 702.

Something that scares me is that Arkansas really is the first team I've felt really comfortable about beating in quite some time.  They are in a tailspin, having lost their last 5 games and 9 of their last 10.  Sprinkled among those losses have been some blowouts, such as their 22 point loss to Auburn and their most recent loss, which was to Kentucky by 16 points.  In all, 6 of those 9 losses have been by double digits.  They've won only one game in the conference, a home game against Alabama, a team that hasn't won a road conference game in over two years.

It's a gimme, right?  Well, not exactly.  Every time we look at an opponent to see how we match up, we have to look in the paint, and Arkansas has exactly the kind of powerful post-up man that gives us fits whenever we see him.  In this case, it is Michael Washington, Arkansas's 6'9" 240# forward/center who is their leading scorer at 16.4 points per game and their leading rebounder with almost 10 per game.  Last time these two teams played, Washington scored 24 points and grabbed 5 rebounds in 34 minutes.  He is a load for Chris Johnson and Quintin Thornton to have to guard.  If he has a big game, anything can happen.

The other danger is that Arkansas can get hot from the perimeter.  They take more 3s than we do, but they don't hit them as much, but guard Rotnei Clark is a solid outside shooter, hitting about 39% from 3-point range.  He's also a great foul shooter, so he needs to be kept off the line.  Fortunately, he doesn't get to the line very often, because he's a spot-up shooter who doesn't do that much off the dribble.

With Fortson back, they also have a very good dribble penetration game.  Fortson is a tough guy to keep up with, though he will also commit a lot of turnovers trying to make too much happen with the basketball.  He's just a freshman, but he's a team leader on the court.

Mostly, I think we just have to play our game and not go cold shooting the ball like we have at times.  If Chris Johnson and Quintin Thornton can just keep Washington from dominating (they don't have to beat him, or even tie him, just keep him from dominating) we should be superior at every other position on the floor.  And Johnson can do it.  He scored 18 last time we played Arkansas.

If there's an X-factor here, it's the fact that the game is in Arkansas, where the crowds are hostile.  Even in their last game, against Kentucky, after having lost 8 of their last 9, the crowd was still into it despite their team being behind most of the game.  It hasn't seemed to help them much to have such a great crowd, and we faced a hostile crowd in Starkville last week if the radio feed was any indication, but it's another thing to think about.