The Door is Suddenly Wide Open

Share All sharing options for: The Door is Suddenly Wide Open 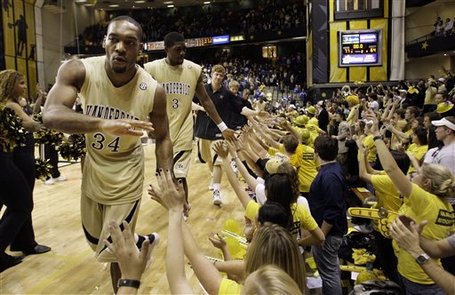 Mrs. ATVS is a Kentucky basketball fan, and I certainly like and want for her to be happy.  This is why I have mixed feelings about Vandy beating Kentucky last night, 77-64.  The result is clearly good for LSU.  LSU remains a 1-loss SEC team while the closest competitors in the standings throughout the entire SEC are South Carolina and Tennessee, both of whom have 3 losses and both of whom have already lost to LSU.

Kentucky was the last team left who could have caught us without a great deal of help.  Even Kentucky needed a little help, but they probably would have caught us if they'd run the table (including beating us), because, let's face it, we probably aren't going to win every game we play down the stretch.  And if they beat us and then catch us, they hold the tie-breaker.

With Kentucky getting its fourth loss of the season, we essentially have a 3 game lead on the field in the SEC, and a 4 game lead on the SEC West, with 6 games to go.  At this point, it would take a monumental collapse for LSU not to win the West and a real slump not to win the SEC.  We really only play two more good teams the rest of the way: Florida and Kentucky.  At this point, we could afford to lose to both and still win the SEC as long as we take care of business against the Auburns, Arkansases, and Vandies of the world.  Of course, all of those teams are capable of beating us if we aren't on our game, but Kentucky and Florida are capable of beating us even if we are on our game, if they bring their A-game.

As it stands, Kentucky has a very difficult schedule down the stretch, as do all the other teams currently chasing us.  Tennessee, South Carolina, Florida, and Kentucky all play each other.  South Carolina, Florida, and Tennessee all have to play Mississippi State. That's a lot of losses to divvy up between the five teams chasing us, and they're already pretty far behind.  We just have to take care of business and not have a dramatic collapse and things look good for us.  And if none of those teams get hot and win out, it's even better.

I'm looking forward to seeing if we can survive another game without our point guard.  It promises to be exciting.