Share All sharing options for: LSU 72 - Arkansas 69: Another Heart-Stopper 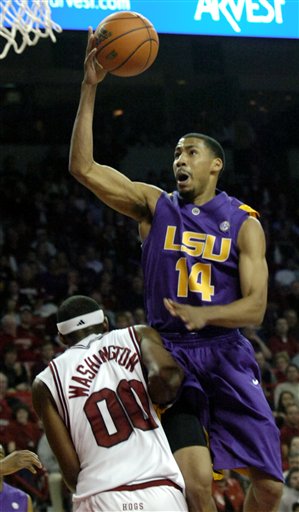 Garrett Temple doesn't score much, but when he does the shot seems to always look like this one

After Arkansas took a 6 point lead on a 3-point play by Michael Sanchez with just over 5 minutes to play, they only scored one more point the rest of the way, as LSU went on a tear to end the game.  As usual, Marcus and Taz led the way with 48 points combined.  Taz had a double-double with 13 rebounds, and Marcus had 7 steals and 6 rebounds.

I got to listen to some of it on the radio, and we played pitifully early in the first half, falling behind by 18 points at one point.  Well, we didn't play pitifully, exactly.  If you believe Jim Hawthorne, we played decently except for committing a bunch of turnovers.  We just didn't hit shots, including free throws.  At one point we were 3 of 12 from the line, and we finished the game 12 of 24.

Fortunately, Arkansas wasn't exactly tearing it up either, or we would have been in real trouble.  One thing about this team that helps them make these comebacks is that they play really good defense, and defense always seems to be the catalyst that starts big runs.  If you play defense, you get easy baskets in transition and you can really get the game to slope your direction.

We clawed back in it at the break, going into halftime down by only 6, and we took the lead briefly early in the second half, but Arkansas went on another run to get the lead back out to as much as 7 before LSU poured on the points at the end to get another W.

The bench once again was anemic offensively, as we got only 2 points off the bench on 1-of-6 shooting and 0-3 from the foul line.  Where is Storm Warren?  Yeah, I know he had some troubles the last time he got big minutes, but he also made some nice plays and got some points.  I don't know if he's played a minute since, and our bench has been pitiful ever since.

It turns out to have been a pretty big night for LSU, as Tennessee and South Carolina both lost.  We're getting to the point where we can start talking about Magic Numbers for this team.

In the West, our Magic Number over MSU is 2.  They sit at 7-4 while we are at 10-1.  If MSU wins the rest of their games, they will end at 12-4, meaning we only need 2 wins to get a tie with them, and we win the tiebreaker.  In the entirety of the SEC, our Magic Number is 2 over South Carolina and Tennessee because we hold tie-breakers over them, and is 3 over Kentucky and Florida.  No other teams even deserve mention at this point.

We are still getting the wins, but this is a team that is clearly struggling without Bo Spencer.  The offense lacks fluidity, and I don't think we're getting the transition points we are accustomed to.  Plus, it is astonishing how little offensive production we're getting from our bench.  Heck, only two of our starters score reliably.  Chris Johnson had a nice night with 12 points, but really only Thornton and Tasmin are getting it done regularly.

The bench isn't all bad.  Chris Bass played a lot of minutes and didn't turn the ball over.  He was abused on defense by Courtney Fortson, and that was a problem, but he probably shouldn't have been guarding Fortson.  He contributed a couple rebounds and was credited with 5 assists, so it's not like he stunk it up or anything.  He's just not going to provide points.

And the strange thing is that Bass can provide points.  So can Quintin Thornton.  They aren't dynamic or anything, but Bass has proven he can knock down an open jumper.  Thornton usually gets a garbage bucket or two through hard work.  It just isn't coming for them right now, when we arguably need all the production we can get from our secondary players.

Anyway, Auburn is next, and they are on a bit of a roll.  It won't get any easier on Saturday, and we really need to play better from here out than we have been the last week.