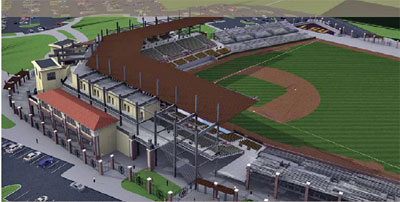 Today is the day that the new Alex Box open.  There will be a big ceremony to commemorate it before LSU takes on Villanova tonight.  The game will be on television in Baton Rouge, but sadly not where I live.  I doubt I'll get much LSU baseball on television here, but I can hope.

In honor of the new Box opening, let us go through the twisty, turny journey of one fan:  me.  I can't say I've always been a great fan of LSU baseball.  I've been to quite a few games, but only a couple in the last 15 years or so.  I paid no attention to LSU baseball at all until I was about 10 years old and then stopped paying attention when the program started declining, only to come back to it when it started being fun again.  Judge me if you wish, but I am only acting like most fans act.

My experiences with LSU baseball begin around 1985 when, for the first time in my life, I watched a college baseball game.  It was on ESPN, and it was a game between LSU and Mississippi State.  MSU was coached by Ron Polk and led by the dynamic duo of Will Clark and Rafael Palmeiro.  They were called "Thunder" (Clark) and "Lightning" (Palmeiro), and they were the sole reason the game was televised.  I don't remember who was on LSU's team at the time.

I think we lost the game, but it was fun, and it exposed a group of dedicated LSU fans to a sport that we had paid absolutely no attention to in the past.  And as it so happened, soon thereafter, LSU started getting really good.  We won SEC titles and went to CWS's, and getting to know all about all of that was fun.  It may be illusory, but in my mind, it all goes back to that game against Thunder and Lightning.

Within a couple of years of that game, my parents bought season tickets to LSU baseball, to add that sport to their growing list of season ticket purchases.  I went to a lot of games in this era, which is probably best known for Joey Bell (soon to be re-christened Albert Belle) and the continuing rivalry with Ron Polk and Mississippi State, who continued to have an outstanding program.

I grew up in an area that loved youth baseball, and I worked in youth baseball as a teenager.  Every one of those kids dreamed of playing LSU baseball when they were older.

Eventually, of course, LSU would go on to be a powerhouse program, winning the College World Series 5 times in 10 years.  I attended LSU for two of those years, 1993 and 1996, before graduating and moving on.  I didn't attend many games while I went to LSU, but I kept up with the team pretty closely.  One of my childhood friends, Jason Williams, with whom I played many sports as a kid (news flash: he was much more athletic than I was, and probably much more athletic than many of you realize), was a key contributor on those championship teams as leadoff hitter and SS/3B.

It was an absolutely terrible time to be at LSU for sports, as the basketball team was starting its slide (the 1995-1996 basketball team was maybe the worst fielded by LSU in my memory) and the football team was in the middle of its darkest period (the Hallman years, which made the Dinardo years look like fun).

But baseball continued to prosper, and carried the banner for LSU among the "major" sports, winning year after year.  Of course, we won five championships, including the still-famous Warren Morris game. 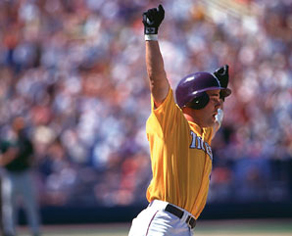 But here's where I tell tales on myself.  I abandoned LSU baseball.  And not just because the program started declining.  Believe it or not, I was at one time a HUGE hockey fan.  One of my college roommates was really into it, and LSU football and basketball were awful, so something had to fill the void.  I chose hockey and followed it passionately, religiously even.  I have since lost my in it as I came back to being passionately and religiously devoted to LSU athletics, but for a while hockey was my sports obsession.

On April 18, 1999, Wayne Gretzky played his last NHL game.  He was playing for a bad team and he had been a shadow of his former self for years, but a big televised ceremony was planned.  It was one of the bigger events in hockey in several years.  It was going to be televised on Fox live as part of a pre-game to Gretzky's actual last game.  I believe it was on a Sunday.  The local Baton Rouge Fox affiliate chose not to televise Wayne Gretzky final game and his retirement ceremony so they could bring us an LSU baseball game.

I was livid.  I called down to the Fox station to complain, but I was rebuffed.  I don't think the person I talked to even realized that one of the greatest athletes of all time in any sport was retiring and that they were passing up an opportunity to put it on television, instead to broadcast a grainy (and, in retrospect, probably meaningless) game between LSU and another SEC school, with announcers who were on par with the PA announcers at high school football games.

I was younger, more impetuous, more given to holding grudges at that time in my life, and I held a grudge, even against LSU baseball for their affront.  It was silly of course, and I realize that.  But the obsessive hockey fan in me just could not accept what had happened.

As a result, I pretty much stopped paying any attention to LSU baseball, even as they won their last CWS in 2000.  The program declined a little bit around the same time I moved away from Baton Rouge in August of 2002.  I attended one SEC tournament held at Legion Field in Birmingham, but other than that I did little to follow LSU baseball.  I wasn't still holding a grudge, but I had lost interest.  It didn't help that their games were almost never televised and it was kind of hard to actually follow them.

Then last year happened.  The team suddenly, with almost no warning, got really really good.  They started appearing on television a lot.  I got to know the players.  I had started my previous blog and Poseur had been writing about the team, but I finally started paying attention to it, and it was a lot of fun.  The games were exciting.  The team was exciting.  We had players who were fun to watch (and many of them are still there).

I've always liked baseball, but I was almost involuntarily becoming a FAN again.  Of course it helps that Paul Mainieri seems to have really picked up LSU's fortunes through outstanding recruiting and great results on the field.  It also helps that this year's team is pretty much the same as last year's team.  How many new starters will there be among the position players?  Two?  Many of the old pitchers are gone, but they weren't the stars anyway, and the young pitchers we saw last year appear ready to become not just OK, but great.

Where baseball was hardly on my radar last year at this time, I am genuinely excited to get the season started this year.  It's a great time to open a new stadium, right as the team is expected to be outstanding.  I just wish I could see the first pitch.