Share All sharing options for: LSU 79 - Auburn 72: Another Tough One 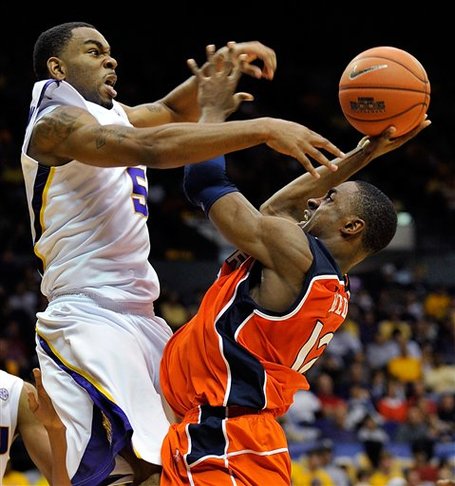 Things just don't come easy for this team, and that's OK.  We've won 11 of our last 12, but the last one we got easily was a 76-62 win over Alabama at home.  Since then we have fought and clawed our way to 4 SEC wins.

That, I think is the big difference between this Trent Johnson-coached teams and the teams of the past couple years.  This team fights.  They give it 100% every night.  This is a team that has gotten opponents' best shots many times this season, and has turned them aside.  We may have a target on our backs because of our gaudy conference record, and each win makes that target bigger and bigger, but this team doesn't shrink from that.  They embrace it and they go out and scratch out wins over decent teams who are extremely motivated to play.

This game looked like it might be easy, as we took a quick 10 point lead early, but Auburn scratched back.  They led briefly in the second half, but while LSU led almost the entire way, Auburn was never more than 7 points behind after they started really playing, until the very end where we put a little distance on them through free throws.

It doesn't get any easier in the near future, as we get Florida next, and then Kentucky, two of the best teams in the conference.

This was a strange game for LSU.  Once again we got no scoring from our bench.  Quintin Thornton had two points, and that was it.  But we got balanced scoring from our starters, as all 5 were in double-figures for the game, including Bo Spencer who returned to the lineup and scored 18 points.

Marcus Thornton led us in scoring with 25, which itself is not unusual, but he only hit 1 three-pointer, which is unusual, and he got almost half his points from the free throw line, a good chunk of them coming right at the end of the game.

LSU won this game at the line, as we hit 21 of 22 and outscored Auburn by 14 from the line.  It made up for a tough defensive night, as Auburn's guards were able to dribble around us almost at will.  Trent Johnson credited this to Bo Spencer being winded from having missed a couple games.

We also committed way too many turnovers, especially in the first half, when we committed 9.  We lost a lot of possessions and a lot of opportunities to get some distance on Auburn because we would throw the ball away or get called for traveling.  Add to that Tay Waller's lights-out shooting from behind the 3-point-line and it's no wonder we had a hard time getting any distance on them.

Give Auburn some credit here.  They played very good defense, in particular hounding and harassing Marcus Thornton the whole game.  Thornton ended up getting his points, but he had to work for them and shot less than 50% from the field, scoring most of his points at the line.

Chris Johnson and Garrett Temple picked up some of the scoring slack, as Temple had his biggest point total since January 17 and Johnson had 14 big points along with production on the boards and with the blocks.  He was second on the team in assists, for crying out loud.  All that, and he stayed out of foul trouble, too.

And thanks to those efforts, LSU is now officially the SEC West champs for the 2008-2009 season.  Mississippi State lost to Alabama yesterday to fall to 7-5.  LSU goes to 11-1, so we're 4 games ahead, but we swept MSU so we hold the tie-breaker.  With 4 games remaining for both teams, MSU can do no better than tie us, and our tie-breaker wins out.

The overall SEC title is a different story.  We are 3 games up on South Carolina, Florida, and Kentucky, and we hold a tie breaker advantage on South Carolina.  Tennessee was eliminated from the race by virtue of their loss to Kentucky yesterday.  Our magic number over South Carolina is 1, and it's 2 over Kentucky and Florida.

Of course, we can take care of business on our own by beating Florida and Kentucky, which would clinch the outright SEC title.  A win over either one of those teams eliminates that team and gives us a big margin of error.  Things get more interesting if we don't win those games, as we would close the season against Vandy and Auburn.  By then, Kentucky will have played South Carolina and Florida will have played Tennessee.  Assuming for a second that Kentucky and Florida win those games, they would go into the final week of the season one game back of LSU and holding the tie breaker.  Florida would play Mississippi State and Kentucky would play Georgia.  If LSU can't get its wins and those two teams win out from here, they would play each other on the last weekend of the season for the SEC title?

Confused yet?  Well, if we win more games you won't have to be.

It sure would be nice to have a good, relaxing basketball game to watch, but LSU doesn't seem to get involved in many of those.  I don't expect it this week either.