Share All sharing options for: Florida Preview and Game Thread 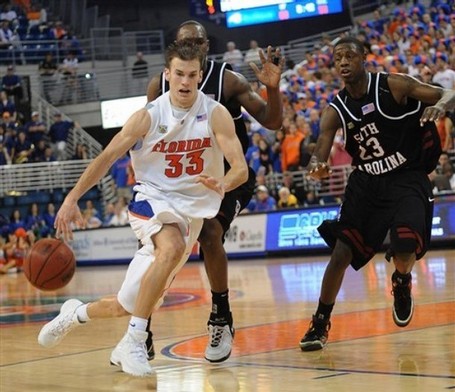 Tonight, we continue our never-ending series of big SEC games.  This time at home. This time against Florida.  This time on a nationally televised broadcast.

There are some reasons to be optimistic here.  First, the game is at home.  That's always big.  Second, Florida does not have that dominant post presence that has cut us to ribbons all year whenever we've had to face it.  Sure, Alex Tyus is a very nice forward, but his 6'8" 220# frame is not the fearsome presence that some other big men in the SEC present.  Though Florida is a good team, this is not as bad of a matchup for LSU as some other teams present.

What Florida has is a lot of length throughout their lineup.  They are led of course by Nick Calathes, a pretty sure bet to be an All-SEC selection at guard.  Did you know he's listed at 6'6"?  He leads them in scoring with over 18 points per game, and he's shooting almost 43% from three point range.  Tyus, Chandler Parsons, and Dan Werner all measure up at 6'8" or taller, but they both take nearly as many 3-point shots as they do 2-point shots.

They also have some smaller players.  Walter Hodge seems to have been around forever, but his point production has declined from last year to this year along with his minutes.  Some of his minutes seem to be occupied by newcomer Erving Walker, a 5'8" shooter who is the other of Florida's players shooting over 40% from 3-point range.

They're a formidable, dangerous team.  We will have to play better against Florida than we did against Auburn, as they are simply more talented and more athletic all-around.

They can be inconsistent, however.  This is a team with the talent to be running away with the SEC East, but like LSU they lack quality wins.  They lost to Kentucky in their only meeting so far.  They lost to Tennessee.  They split their series with South Carolina.  Their best win by a mile is an early-season win over Washington in Seattle.  Couple that with some bad losses (Georgia?  I mean, really?) and you're looking at a team that looks really solid on paper, but hasn't translated it to the court when it matters.

The key will be stopping their perimeter game.  They've attempted 165 more 3-pointers than we have on the season and they're hitting them at 37%, the same as us.  Our perimeter defense will have to be much better than it was against Auburn.  We also have to win the battle on the boards.  For such a long team, Florida doesn't really have great rebounding numbers.  We need to press that advantage.

Florida may be as talented a team as we've played all season, but we can beat them if we play our game and don't make a lot of mistakes.  Our big players will have to come through.