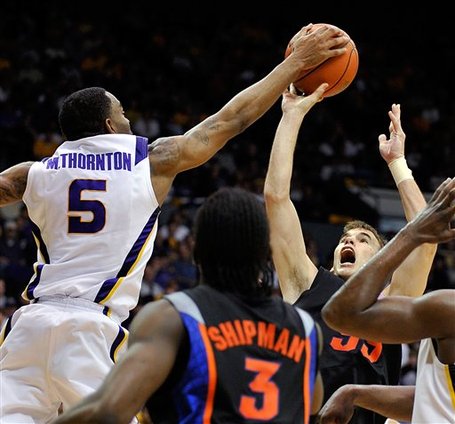 That, my friends, was an entertaining game to watch.  The Mardi Gras crowd was as raucous as any I've seen at LSU in ages.  It was well-played on both sides, and until the final couple minutes could have gone either way.  It doesn't hurt its watchability that the good guys won in the end.  We put on a really impressive showcase on national television, I think finally announcing our presence to the country.

We also captured a share of the overall SEC title, with plenty of chances to turn that share into an outright win.  The Magic Number sits at 1, with only Kentucky still standing.  They play South Carolina tonight, and we may meet our magic number while sitting at home watching TV.

Secondly, I would actually really like for Kentucky to win the East, or at least come in second or third if they can't win it.  I would like this to happen for two sub-reasons.  A) Mrs. ATVS is a Kentucky basketball fan, and it would make her happy, and B) of all the teams in the SEC, Kentucky is the toughest matchup for us because Patrick Patterson (when healthy) is the strongest and most skilled post player in the league.  6'8" 220# Alex Tyus was able to back Chris Johnson down and get good shots close in to the goal.  6'9" 235# (and he's probably even bigger, weight-wise) Patrick Patterson is bigger, stronger, and more skilled around the basket than Tyus is.

The point being, I would rather Kentucky not be the E4 seed in the tournament, because then we'd probably end up having to play them in our first tournament game.  That would not be good.  Kentucky is an inconsistent team and they sometimes find ways to lose to lesser teams, but they're also about the most dangerous team in the tournament to us.  If they had to play a couple games before they reached us, that would suit us just fine.

But I digress.  It was an exciting game last night, and I think I can finally say that we've locked up a tournament bid.  Even if we lose the last 3 and tank in the , it will be hard to leave us out completely.  Marcus Thornton came up huge on the big stage last night, going for 32 and playing with the tenacity we've come to expect of him this year.  Garrett Temple had the biggest scoring night of his career, going for 21 on 7-10 shooting and grabbing 7 rebounds.  He also guarded Nick Calathes most of the night and held him to just 12 points on the game, and just 2 in the second half.  Garrett even handled the point for a lot of minutes, as Bo Spencer battled a little foul trouble late in the first half and early in the second.  Temple was probably the MVP of the game for us despite Thornton's 32 points and 6 rebounds.

Florida, for their part, only shot 43% from the field, but it seemed like at times they made everything they threw up.  It also seemed like defensively we gave up a lot of easy baskets.  I don't think any team has dunked on us quite as much as Florida did.  They were very good at playing a finesse offense that changed directions, deceived the defense, and left players open for easy baskets.  I suppose that when not running those mis-direction plays, they really struggled to get good shots, because they sure didn't shoot well overall despite a lot of easy points.

One thing I would really like to concentrate on towards the end of this season is to work on that bench.  Anyone remember Delwan Graham?  Didn't he used to play for us?  What about Storm Warren?  Yeah, I know we need to win games, but these guys used to contribute.  Storm can even score a bit, and we lose a ton of scoring whenever we try to rotate our starters out.  We need our starters to be fresh when post-season rolls around, and we want to prep our team for next year when we'll lose 5 of the 8 guys who played last night, and that's if Tasmin Mitchell stays.

Of course, I would rather win the remaining games, and the biggest test remaining is on Saturday.  After that, we get winnable games against Vandy and Auburn.  It's been a very fun ride this season, and I can't wait to see where it goes from here.