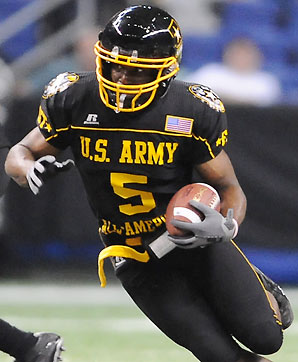 Bryce Brown is coming to LSU for his visit this weekend, which also happens to be the second Junior Day for LSU, where we expect to pick up a couple commitments for the 2010 class.  Things have gotten interesting on the Bryce Brown, but for those of you just learning about this, let's recap.

Point 1:  Bryce Brown is a tremendous running back prospect, maybe the best skill player in the country for the 2009 class.  He is, as yet, unsigned.

Point 2:  Bryce Brown has been committed to the U of Miami for quite a while, where his brother is also on the football team, but his brother may also been disenchanted with the U.

Point 3:  Bryce has decided to think about things for a while, and has taken visits to Tennessee and soon to LSU as well.  He is also reportedly considering Oregon.

Point 4:  He has a shadowy "mentor" that no one quite knows what to make of.

The latest rumor is that Miami has gotten fed up with him and his "mentor" and is on the verge of telling him to get lost.  Not everyone is convinced this is true, but if it really is true then this could be outstanding news for LSU.  Most people have believed that Brown was not very serious about looking around and would eventually end up at the U of Miami after getting everyone's hopes up.  Now, if that's the plan, he may have to mend some fences first.

Or maybe it was never the plan.

In any event, even if Miami is out of the picture for Bryce Brown, that does not mean he's going to LSU.  Most of the people who think they know what's going on believe that Tennessee is not a serious player at this point, and that if Miami is out then he's really down to Oregon and LSU.

When was the last time LSU and Oregon went head-to-head for a recruit?  I wondered this earlier today, and then realized it wasn't really that long ago.  In the 2007 class, quarterback Darron Thomas de-committed from LSU and signed with Oregon, apparently because LSU kept recruiting other QBs after Thomas committed.  LSU ended up with Jordan Jefferson, and Thomas played a fair bit as a true freshman at Oregon.  I think both LSU and Darron Thomas are happy with how it played out.

Don't assume that Oregon is a smokescreen.  Brown probably wants to go somewhere where he believes he can contribute quickly, and Oregon is losing its leading rusher (Jeremiah Johnson).  They return a couple of key backups, and there's certainly no guarantee that Brown would be able to step right in, but losing their main guy makes them look attractive.  LSU has a big opening for running back, but really only if Brown is willing to understudy for a year, as Charles Scott is going to be the key guy this year and Keiland Williams is probably going to be the #2.

LSU is a great place for a running back to go if he's willing to be a little patient, but not a great place to go if he's dead set on playing a lot immediately.  Of course, there is no major program in the country that will hand a job to a true freshman and not make him earn it.

Let's keep in mind point #5 too:  Even a prospect the calibre of Bryce Brown is no guarantee to have success at the college level.  The road to the NFL is littered with the rotting carcasses of the careers of 5-star running backs who didn't live up to expectations.

Let us also keep in mind point #6:  Michael Ford is a darn good running back prospect who will take a back seat to no one.  Not even Bryce Brown.  Brown is more polished right now, but Ford is an outstanding talent too, and comes with no red flags about character and no baggage.

As for Brown, he'd be a great addition to this team, and would probably greatly improve the 2010 and 2011 LSU teams.  He's probably also the kind of guy who would leave after 3 years if he even remotely lived up to expectations.  The news lately has been encouraging, but no one is saying that he's leaning to us yet.  There's reason to be hopeful, though.