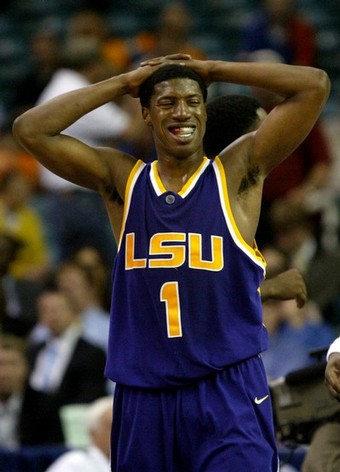 Why is Tasmin smiling?  LSU won the SEC last night, while sitting at home.  Thanks to a thorough thrashing of the Kentucky Wildcats at the hands of the South Carolina Gamecocks, where the final score of 77-59 actually failed to capture to breadth of South Carolina's domination, the last team in the conference that could catch LSU and win a tie-breaker against them fell by the wayside.

I think some other things happened too, things that have little to do with LSU.  I think the honeymoon for Billy Gillespie in Lexington, if it wasn't over already, came to a crashing halt.  I think Kentucky's NCAA hopes took a bit of a dip, as this wasn't just a loss.  Fortunately for them, they managed to cut the margin of victory down from the upper 20s into the upper teens, making it look not quite so much like a stinking pile of excrement to the selection committee.  If you're a bubble team, you don't want to have a late-season blowout loss to another bubble team on your resume.

Now, mathematically only South Carolina can catch LSU in the standings, but we hold a tie-breaker over South Carolina.  Though we still technically have clinched only a "share" of the title, I'm calling it now.

It's still a mystery who LSU will play.  Clearly, we are in the W1 position, which plays the winner of the opening game between W5 and E4.  Right now W5 looks a lot like Alabama.  E4 is still up for grabs.  It could be Kentucky, Florida, or Tennessee right now, though South Carolina could still fall back into it too.