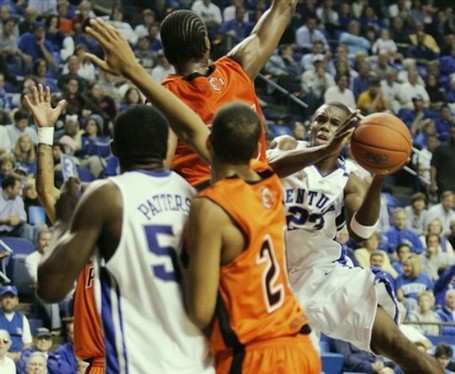 The problems for Kentucky is that these guys represent the end-all and be-all of Kentucky's offense, and their role players have not come through for them.  No other player is averaging more than 7.5 points per game, which is about what Garrett Temple is averaging for us, and no one thinks he plays offense well, last game excepted.

Point guard Michael Porter gets abused by opposing teams' quick defenders and quick penetrators.  Ramon Harris is an offensive liability, but a pretty solid defender at the 3-spot.  Perry Stevenson is a long shot blocker and scores a good bit on dunks, but doesn't add much else.  Even his rebounding is less than one might imagine given his length and athleticism.  He's averaging 6.1 rebounds per game, which is just a little more than Marcus Thornton is averaging.

The result is a disappointing season.  Kentucky has two of the best players in the conference.  (Note: If I had to make a 1st team All-SEC at this point, it would be Devan Downey, Jodie Meeks, Marcus Thornton, Nick Calathes, and Patrick Patterson, and yes I realize that's 4 guards).  But Kentucky has not translated two star players into the kind of success that Kentucky usually has.  They're currently 8-5 in the conference with bad losses against Vandy and Ole Miss, and they're coming off one of the most one-sided beatings I've ever seen Kentucky take.  They're no lock to make the NCAA tournament at 19-9 and not a whole lot of good wins.  They lost to Louisville, to Miami, and to North Carolina, beating only Indiana among the quality OOC teams they played in the pre-season.  Kudos for playing a tougher schedule than we did, but it helps to win them.  It doesn't help to have an early-season loss to VMI.

The SBNation blog, A Sea of Blue, is the best SBNation blog in the SEC for covering basketball.  Naturally, it's the Kentucky Wildcats blog.  I will let A Sea of Blue weigh inon that, because they know more about Kentucky than I do.

I think it's time for us to face the fact that Coach Gillispie has largely failed this year.  I use the term "failed" in the sense that it is clear to me that he has not gotten anywhere near the most out of this team for whatever reason.  Part of it is surely his fault -- he has stubbornly refused to change his game plan regardless of the opponent, and that philosophy has not worked well.  Now, before we get a bunch of coach bashing happening, let me continue.  What I just said doesn't mean it can't work well, it just hasn't with this team.  They have not been able to execute offensively with any consistency, and when mismatches are forced on the team by circumstances, this year's version of the 'Cats has universally responded poorly on both offense and defense.

It seems that Kentucky is very tentative against teams where they know they have matchup problems, and that shows up everywhere.  That's why the 'Cats lost so badly -- this UK team clearly had zero confidence it could beat South Carolina last night, and that assessment became a self-fulfilling prophecy, in spades.  Michael Porter bringing the ball up against Devan Downey was a hopeless situation, something the Coach Gillispie could not fail to know.  Yet there he was, doing it anyway.  We all know what the definition of insanity is, and I think we have to admit that for 11 minutes at least, Coach Gillispie was insanity made flesh.  Exactly what you would expect to happen did happen.  Exactly.

Gillispie's strategy in every single game this year, regardless of opponent, has been the same -- get the ball to Patterson or Meeks first, and there is no plan B.  That has worked some games, and some games it has failed, but he has been nothing if not consistent.  Last night, despite being behind by 20+ points, UK did not shoot three point shots -- it threw the ball into the post every single possession.  The team executed Gillispie's plan pretty well, but the plan failed utterly.  I have no idea how many touches Patterson got, but he took 24 shots, his high for the year by a significant amount.

If I may add something to this that I think A Sea of Blue misses, I think Kentucky just isn't as talented this year as it had been when it was winning consistently.  Yes, Meeks and Patterson are both outstanding players.  Other than that though, who on this team is going to get a sniff at an NBA roster?

With the exception of Patterson and Liggins, Kentucky virtually gave up in the second half.  That's frustrating to us fans, because we remember times when the 'Cats would lay it all on the line for 40 minutes.  This team, as Gillispie has rightly pointed out, lacks toughness.  Not physical toughness, but rather, mental toughness.  When the chips get down, the team gets down and begins to mope.  I don't know what you can do about that, but the saying is, "Attitude reflects leadership."  I'm looking at you, coach.  To be fair, though, there is only so much coaching can do.  You have to have something to work with, and instilling mental toughness where none currently exists is a long-term prospect.

All through my childhood and through my adulthood until very recently, Kentucky's has always been littered with future NBA players as well as very good college players who weren't really pro prospects but could really play at this level.  Think:  Travis Ford.  The new Kentucky has Meeks and Patterson and then a lot of players who are interchangeable with the bulk of the players in the conference.  South Carolina may not have a Patterson, but they have 6 or 7 players who are better than Kentucky's 3rd best player.

I will agree that Billy Gillespie hasn't gotten it done this year.  It is clear they were out-coached against South Carolina.  The Gamecock defense was ready for everything Kentucky threw at them, most of which got thrown right back.

Of course, this is also the team that trounced Tennessee twice and has beaten Florida.  They're not a bad team.  They're just not up to Kentucky's usual standards and they are very beatable.

This is a team that throws the best center in the conference at us.  Patterson is strong as a bull, which lets him get close to the basket and hit 63% of his field goal attempts.  It will be the biggest challenge for LSU's interior defense since Xavier pounded us inside whenever they wanted.

We also have the question of who do we let Tasmin Mitchell guard?  Do we let him guard Patterson, who has several inches on him, or do we let him guard Perry Stevenson who plays well above the rim at all times?  Both are mismatches.  My thought is to take a lesson from South Carolina and let Tasmin man-up on Patterson inside with Chris Johnson providing weak-side shot-blocking action.  It's risky because if Johnson's ever out of position, Tasmin will be only a little more effective alone against Patterson than I would be.

I think to win this game, we need to take advantage of Kentucky's problems elsewhere in their roster.  If Michael Porter plays, we need to take the ball from him, or drive past him.  We need to sucker DeAndre Liggins into hogging the ball.  He has a tendency, from my observation, to take bad shots and not get the best players involved in the offense, and he shoots less than 40% from the field.

And we need to execute in transition, because I'm not sure how effective we'll be in half-court sets against Kentucky's size down low.

It should be an interesting matchup and I can't wait to see it.  Despite our 12-1 record, I am never confident we'll do well.  Maybe if we win this one, I'll change my tune.