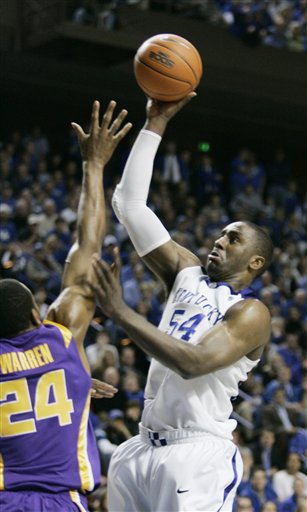 This team just keeps doing it.  It almost doesn't matter what happens in the first 35 minutes of the game.  We will win it in the final 5.  This game was no exception.

I was right about Kentucky having a big mismatch inside.  It would have been true even if Chris Johnson was healthy, which he was not.  Our strategy was to accept the mismatch, give up the points to Patrick Patterson and make sure Jodie Meeks didn't beat us.  For about 16 minutes of the first half, it seemed to work brilliantly.  For the next 14 minutes of the game, it appeared to be pure folly.  After going ahead by as much as 12, we fell behind by as much as 10.  The Rupp crowd was loving it and we appeared to be out of it.

But this team is never out of it.  At that point, the big mismatch that LSU has over Kentucky took over.  We're tougher, both mentally and physically.  If this LSU team is in the game at all with the clock below 10 minutes, you have to like our chances.  This time, we were barely in it, but it was enough.  It took a 3-pointer with under 10 seconds remaining to break a 70-all tie, but that's the kind of thing this team does.

Give Kentucky a little credit.  They found a lineup that seems to have corrected some of their problems.  Guard Kevin Galloway took over for Michael Porter in the second half and settled the team down, showing toughness and assertiveness with the ball, two things Porter has lacked all season.  Darius Miller hit a couple shots, and was solid.  It may be too late for Kentucky, but this appears to be their lineup of the future.

For once, LSU got really solid contributions from the bench.  Terry Martin provided points and surprisingly solid defense subbing in for both Garrett Temple and Bo Spencer.  It seems he has fully learned the lessons that Trent Johnson was trying to teach by suspending him.  I'm glad he's finishing up his college career as a solid contributor.  Storm Warren, who had apparently been on some kind of a Mormon mission for a couple weeks, took a lot of minutes in the second half, as Chris Johnson was ill and Quintin Thornton was in foul trouble (and, let's face it, was ineffective as well, committing 4 fouls in 7 minutes).

Storm was no more a match physically for Patrick Patterson than either of the other guys were, but he put in a game effort and had at least some effectiveness on the defensive side of the court.  I think he has a real future as a solid 4 or an out-of-position 5, especially if he can further develop the offensive part of his game.

But the story, of course, was the first half play of Tasmin Mitchell and the second half play of Marcus Thornton.  I don't care what anyone says about Patterson, Meeks, and others.  Marcus Thornton is the best all-around player in the conference this year.  He has improved his game so much from last year that he is virtually a different player.  He's tougher around the basket.  He's a rebounding machine for a guard, pulling down 9 tonight.  He's cut down on his turnovers and increased his assists.  He takes better shots, rarely forcing bad shots up anymore.  He isn't a lock-down defender, but he is dramatically improved on defense from last year.  The guy is a great player at this level.

Tasmin Mitchell carried the team in the first half with 16 points, and Thornton carried us in the second with about 20.  Mitchell was quiet in the second half, but when the Kentucky defense rushed to stop Marcus Thornton from taking a go-ahead 3 pointer, Taz flashed open for his favorite perimeter shot, the set shot from the top of the key.  He buried the 3 pointer and Kentucky missed the desperation three-pointer at the end.

Don't forget, also, the good game that Bo Spencer had, including 4 big three-pointers and a big runner in the lane towards the end.  Garrett Temple played brilliant defensively, combining with Terry Martin to hold Jodie Meeks to 1-of-9 shooting from three.  He got his points, but did it mostly in transition.  The only thing that kept him from shutting down Meeks entirely was the foul trouble he got into.

This game clinches sole possession of the SEC Title for LSU.  Congratulations.  It's been a great season.  Now go get the SEC Tournament championship too.