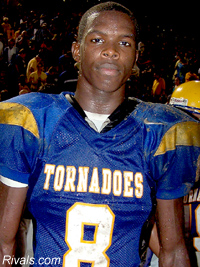 Yesterday came with some good and bad news.  On the good side, Sulfur linebacker Tahj Jones finally committed to LSU.  Jones is a nice prospect.  He's a little undersized, but he has good speed and quickness for a linebacker.  He may not have the grades to qualify yet, and his offer may be a greyshirt offer in any respect, especially if Jarvis Jones decides to come to LSU.  He doesn't make or break this class.  He's not really a national recruit, but he chose LSU over Ole Miss and TCU.  He's a guy that Chavis really liked. 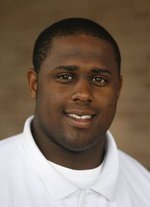 The bad news is that Darrington Sentimore, the very talented defensive tackle who had been shunned by LSU before ultimately taking what was a high profile visit to LSU at the last minute, where he then finally received a scholarship offer from Les Miles.  There were multiple accounts of Sentimore telling players, coaches, and people on the street that he was going to be a Tiger.

Then, yesterday the bad news came out that Sentimore had re-affirmed his commitment to Bama.  Given all the accounts of how much he had wanted the offer from LSU, and how excited he was to get it, and the fact that he has two former high school teammates on the team (including starting QB Jordan Jefferson), I don't really know what to believe about where he'll end up.  I have decided I won't believe anything until he faxes in a letter of intent on Wednesday to wherever he's going.

If he doesn't go to LSU, this is probably one you can blame on the coaches.  Sentimore's a kid who many believe is one of the five most talented players in the state.  Mentally, he's supposedly a question mark, but physically he has the tools to be an All-Conference player one day.  LSU coaches decided that with Davenport and Josh Downs available at defensive tackle, and with Sentimore's questionable academics, they didn't need to take a chance on this kid, and so they didn't really pursue him, before ultimately deciding they wanted him anyway.  If they had been more decisive earlier in the process, we would have most definitely had him.  Instead, we piddled around with a couple low-percentage out-of-state kids before coming back to him.  I'm not saying we shouldn't have recruited William Campbell or Jamarkus McFarland, but we should have been keeping up with Sentimore too, just in case.

I kind of suspect this is one where the transition from the old defensive coaches to the new may have hurt us.  I don't think the former defensive coaches liked him very much, and the new coaches weren't able to make up the ground lost.  Right now, your guess is as good as mine as to whether he will sign with LSU, but I'm not ready to give up on it.

Another LSU target appears to be a little mroe certain.  West Monroe linebacker Barkevious Mingo is reasonably likely to sign with LSU.  Mingo is a very tall linebacker with a great frame at 6'5" with very long arms.  Some think his future is not at linebacker, but rather at defensive end, particularly as a 3rd down rusher.  The most frequent comparisons you see for Mingo is to former Florida Gator and current Tennessee Titan Jevon Kearse.  Mingo has gone through the recruiting process and has taken his visits, including a late visit to Connecticut.  Most seem to agree that he's been all-LSU all the way, and just wanted to look around.

Mingo, as pictured above, was at the US Army All-American Bowl Game.  He got beat by Bryce Brown in coverage, but then again everyone got beat by Bryce Brown, who took advantage of the mandated man-to-man coverage to abuse linebackers all day.  Mingo has a lot of work to do to improve his technique and build his strength as he did even begin playing football until his junior year.  The sky is the limit for this kid in the future, but he will have to work towards it.  He's a tremendous athlete, however, as he is listed as the most athletic linebacker in the 2009 class nationwide by Rivals.

That's all for today.  Tomorrow we will finish up this series on late recruiting drama and uncertainty, even though I doubt we get to everyone who might sign with LSU.