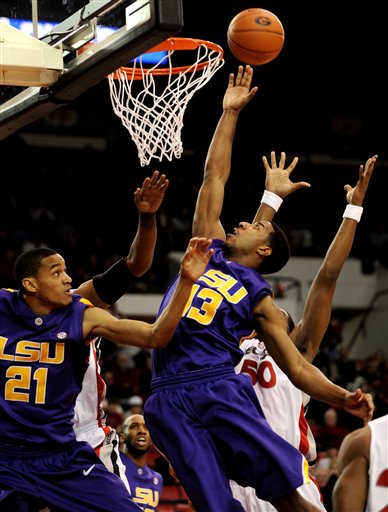 Lest we forget, there was also a basketball game last night.  Once again, LSU got a much-needed and much-appreciated win against an SEC opponent.  OK, it was Georgia, who hasn't won a conference game this year.

LSU jumped out to an early lead, and led by as much as 14 in the first half until Georgia closed the first half with a 10-0 run.  LSU opened the second half with a 10-2 run to build the lead back up to 12 and Georgia never really threatened after that.  LSU led by as much as 23 with 7 1/2 minutes to play, and ended the game with the bench cleared.

Tasmin Mitchell and Marcus Thornton led the way.  Taz had 27 points and 9 rebounds while Thornton had 30 points.  The rest of the team scored 23 points.  Bo Spencer had a tough night, going scoreless on 0-7 shooting in only 21 minutes.  Chris Johnson didn't have his usual good night, as he was in foul trouble most of the time and only played 17 minutes, scoring 7 points.  Johnson had played a bunch of great games in a row, and last night he struggled.

It's great to see Taz have a good night.  He'd had a couple of horrible shooting games in a row, but he seems to have broken out of that.  He was 12 of 16 from the field, played 35 minutes and stayed out of foul trouble.  He was the high rebounder on the night for either team as well.  On a night where Bo Spencer and Chris Johnson weren't getting their points, Taz came up big.

We remain alone in first place in the SEC at 6-1.  Poseur thinks we need 10 SEC wins to get to the NCAA bubble, and we're more than halfway there.  I would think 12 wins would make us pretty secure, and that is certainly within reach.  We just have to win our home games and beat the bad teams on the road.  While we've got some tough games on the schedule (at MSU, at Kentucky, vs. Florida), there's not a single game left on the schedule that LSU can't win if we play well.

Next up, we get Alabama on Sunday.  Since they beat us in the SEC opener, they have really struggled, winning only one other SEC game.  They have an interim coach now.  This is a team we really should beat at home, and a loss would be demoralizing, but not devastating.