Share All sharing options for: The Randle/Benton Story is Even More Disturbing Than the Janzen Jackson Story 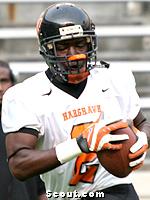 Deangelo Benton: The loser of a high-stakes poker game that he never asked to be playing.

It is becoming obvious now that Les Miles was put in a very difficult position by people associated with Rueben Randle, people uncomfortable with Randle competing with Deangelo Benton.  Reading between the lines, it is clear he was told, "You can't have both."  Les Miles thought about it and decided that while Randle and Benton were roughly equal on the field, Benton was an academic risk and that because the 3 year time clock until he's eligible for the NFL started 2 years ago, he was a risk to go to the NFL at any time.

Les Miles made the decision to cut Benton loose.  It was the safe call.  Had he lost the best player in the state of Louisiana for the 2nd time in 3 years, Miles' job security would have become rather precarious.  I think Miles did exactly what he needed to do for his own short term interest, as you can only imagine the fetid stink that would have been around the program had Randle gone to Alabama or Oklahoma, despite the otherwise outstanding class (and the class is still outstanding, even with having lost Janzen Jackson).

But let's look at this a little closer and see just what a Faustian bargain Miles made.  There are a LOT of bad repercussions that could come of this, and let's look at just a few things to consider:

1.  What does this say about who's in charge?  A recruit, if he's highly coveted enough, is able to dictate to the coach that he should cut ties with a guy who has been around the program for two years.  Recruits often secure promises that "I won't recruit any more quarterbacks/running backs/whatevers if you commit to me."  It's no big deal.  But this isn't that situation.  This is a situation where a player had been involved with LSU for years.  He had even moved to Baton Rouge at one point, expecting to get qualified.  He was, for all intents and purposes, a member of the team, just not dressed out.  A recruit, albeit a talented one, gave an ultimatum to cut that guy loose and we caved.  Is the recruit running the team now?  What other decisions can a recruit force a head coach to make?  What if he doesn't like the position coach?  Can he order up a new one?

2.  What does this do to team chemistry?  Deangelo Benton has friends on the LSU football team.  Two other of his former high school teammates are LSU Tigers today: defensive linemen Kentravis Aubrey and Josh Downs.  He got to know many of the players when he was being recruited and when he was living in Baton Rouge.  How are those guys going to accept Rueben Randle, the guy who got him shipped off?  Everyone knows what happened now.  Will Randle ever be truly accepted by the group of upperclassmen who were close to Benton?  What will they think of the coaches who made the decision to cut him loose?  Some of the players from his original recruiting class are now team leaders: Joseph Barksdale, Chad Jones, Drake Nevis, etc.  How will those guys respond to Randle?

3.  What does this do with the relationship with Bastrop High School?  This is perhaps a bit more complicated of a question, as LSU cut off one Bastrop player to appease another Bastrop player.  Bastrop coach Brad Bradshaw had been working personally with Deangelo Benton to get him qualified, meeting with him in his office every day to go over his coursework and keep up with how he was doing.  Bradshaw has been one of LSU's biggest supporters, and Bastrop has been a terrific feeder school for LSU as a result.  At the last minute, LSU axed one of his prized recruits that he had been working so diligently on to get him qualified.

"I know what I say don't matter," Bradshaw said. "I'm nobody. But I don't like how this went down."

I don't like how it went down either.  Maybe Bradshaw ultimately doesn't care that much, as Benton can still get qualified and go to Auburn and play high level football.  Maybe his enmity is more with Randle than with LSU.  I don't know.  It will be interesting to see what happens the next time Bastrop has a big-time recruit.

4.  What pressure does this put on Randle to perform?  Benton is very likely to be heavily in the wide receiver rotation at Auburn from the very beginning.  Their depth chart is not anywhere near what LSU's is at that position.  These two players will forever be linked and compared.  If Benton tears it up, which there's a pretty good chance he'll do, the pressure will be on Randle to match him, and Randle has a tougher depth chart to negotiate.

5.  Is it the moral thing to do?  I have a cat.  I 've had this cat since before I met the woman I ended up marrying.  My wife hates my cat.  And the cat hates her.  My wife would probably not be very sad if the cat keeled over and died.  My wife has never given me an ultimatum of, "Either your cat goes or I go."  I'm sure she would secretly like to do it, but she hasn't.  I have my suspicions as to why she hasn't:  I think she's realizes it's wrong to make someone make that choice.  I think she knows that the person who makes that ultimatum is automatically the villain in the story, and she's not interested in being the villain.  If you're ever put in that position, isn't the moral thing to do to stand by the person (or cat, in this case) that didn't put you in the position?  Aren't you supposed to say, "My cat has been loyal to me lo these 7 years and has never insisted I get rid of Mrs. ATVS" and stand by the cat?  Alright, maybe that's taking things a little too far, but you get the idea.

I'll be first say that I'll probably get over it, especially if Randle becomes a great player.  And of course this would all be moot if Benton had gotten qualified when he was supposed to.  He'd be a junior now and probably headed to great things, and Randle wouldn't have been concerned about him jamming up the depth chart forever.

This is going to stick in my craw for a while though.  It's ugly business.  I also think it's somewhat unprecedented.  We have a great class, but I'm left with a very sour taste in my mouth over the Randle situation and the Janzen Jackson situation.  I would say, "That's recruiting!" but these are not typical recruiting stories.  These are situations brought on by individuals breaking new ground in recruiting power plays and tactics, respectively.

I don't blame Les Miles.  He was put in a no-win situation.  He had to either relent on the Benton issue or face the wrath of millions of angry LSU fans who would have wanted Randle at all costs.  And what would Miles have looked like if he had chosen Benton and then found out that he had failed to qualify again?  No, Les, I think you did the safe thing (an odd thing to say about the guy who has a reputation for taking crazy risks), but I think there could be some long term problems caused by it.