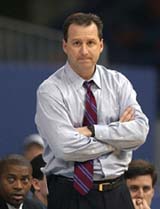 LSU played Alabama in the SEC opener for both teams on January 11.  Alabama won that game 65-59 in a game marred by questionable officiating and poor shooting by both teams.  Alabama guard Senario Hillman had the game of his life, scoring 24 points, a career high thus far.

Since then, of course, the two teams have gone in opposing directions.  LSU has not lost a conference game since that day, and Alabama lost 3 of their next 4, sparked by the departure of former All-conference guard Ronald Steel, and culminating in the mid-season firing of coach Mark Gottfried.

Since Gottfried was fired, following a heartbreaking 10 point loss to Kentucky in which Alabama led much of the way and was tied as late as 13 minutes into the second half, Alabama has not really fared much better under an interim coach.  Their 3 games since Gottfried's ouster have been against a who's who of the worst teams in the conference: Arkansas (1-6), Vandy (3-5), and Georgia (0-7).  They went 1-2 in that stretch, giving Arkansas its only conference win.

With this game being at home for the Tigers, and with these two teams on markedly different trajectories at the moment, one has to conclude that LSU is a very heavy favorite.  Of course we are.

Which is not to say, of course, that we are sure winners.  We aren't good enough to overlook anyone, even though I think we are clearly better.  As always, when gauging how we match up with an opponent, I begin with the post players.  We struggle with big, strong post players.  Alabama has a number of 6'9" players, all between 225# and 236# in Jamychal Green, Justin Knox, and Jamene Coleman.  Not behemoths, exactly, but big enough to cause trouble.  They score an average of 19.5 points per game between them.  On January 11, they scored 17.  Not exactly a great night from the post players, but they won anyway.

It's going to be a very different game this time around, as Bama does not have Ronald Steele, who only registered 5 points against us, but played 35 minutes at point guard.  Without that influence, I expect them to struggle.

The key I think will be to match our usual fast start in games with a good middle.  In most of our recent games, we have played well early only to go cold late in the first half or somewhere in the second.  It sure would be nice not to have a 5 minute scoreless run at any point.  It would make me feel better.

This game also marks the halfway point in the conference season, and with a win we will remain on top of the conference all alone, with a big game coming up against Mississippi State later in the week.

This game will be televised on Raycom Sports at noon central tomorrow (Sunday), so I get a chance to see it this time.  Yay!