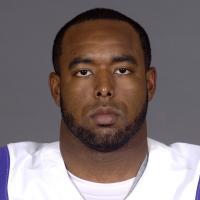 One grossly undercovered story on this website last week was the news that defensive tackle Charles Alexander was granted a 6th year of eligibility by the NCAA, due to his multiple injuries over the course of his career.  Alexander redshirted his first year, then missed all but one game in his redshirt freshman year due to injuries.  He had a fine sophomore season, but then he blew out his knee after the third game of the season in 2007, his junior season.

He played every game last year, but I don't think he was quite himself.  I think it's no coincidence that LSU's defense was dominant in 2007 in the games in which Alexander played.  As a reminder, in those games, LSU beat Mississippi State 45-0, beat Virginia Tech 48-7, and then beat Middle Tennessee State 44-0.  After that, which was also after Alexander's injury, games got much tighter, our defensive line struggled to get pressure on the passer, and in general it wasn't the same team that had dominated its previous opponents.

At his best, Charles Alexander plugs the middle of the line, occupies blocker, and opens space for other, quicker defensive linemen to operate.  At his best, Alexander is a load who occupies two holes in the line and allows other players to roam free.  In 2008, he didn't make a lot of plays.  I know he tried his hardest, but I don't think his knee was 100%.  As a result, he didn't have much quickness and one offensive lineman was strong enough to handle him.

In 2009, even if he's not his 2007-to-early-2008 self, he will provide leadership to what will be a very inexperienced line.  If he's at his best, he will singlehandedly give LSU a much better defense.

I didn't miss this story so much as I just declined to write about it given that all the dramatics relating to National Signing Day, but make no mistake.  This is a big story for the 2009 team.  Of all the players who could have not been a part of the 2009 team, but are (including returning seniors like Brandon Lafell, Ciron Black, and Charles Scott and hot-shot incoming freshmen like Rueben Randle and Russell Shepard), Charles Alexander is arguably the most important for the 2009 season.  He won't make a lot of headlines, as he's not the kind of player who's likely to make a lot of sacks or a lot of big tackles, but he will quietly make life very hard on opposing offenses, if he's back to his old self.

If he's not back to his old self, he'll make a great mentor for young defensive linemen like Chris Davenport.  Welcome back, Cheese!