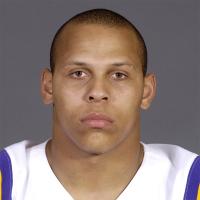 He's pretty much it.  Defensive end Rahim Alem is coming off an All-SEC season where he was a constant threat to get at the quarterback.  In his senior year, he will finally be the primary right side defensive end for this team, and we expect big things from him.  Graduation has left the coaching staff searching for the players who will be the next great LSU defensive linemen.

While the starter on the right side appears settled, it remains to be seen who his primary backup will be.  This is an important question, as unlike with the offensive line, backup defensive linemen get a fair number of snaps long before games are decided.

We'll get to the back half of the rotations in a second, but for now there are 3 other positions to watch to see who will get the starter's minutes.  Let's look at the cast of characters at defensive tackle:

Let's start on the far left.  6th year senior Charles Alexander returns following a ruling from the NCAA that he could get another year due to his near-constant injury problems.  I maintain that in the 2007 season, Charles Alexander was the difference between the defense being dominant and merely being good.  He blew out his knee after the third game of the season and the defense was never nearly as good again.

Charles came back for the 2008 season, but he was not his former self.  He was clearly still battling the injury, and he was not able to occupy blockers quite as well as he had.  If he can return to his 2007 form, it will make this defense that much more dangerous.

Next to him is junior defensive tackle Drake Nevis, who has shown flashes of being an outstanding playmaker at the tackle position.  Many, including myself, have wondered why he didn't play more last year, as every time he played he made things happen.  With the departures of Ricky Jean-Francois and Marlon Favorite, the way is clear for Nevis to be the new "penetrating" defensive tackle next to the space-eating defensive tackle.

If Nevis finally reaches that prodigious potential he has shown, look out.  This guy has All-SEC written all over him.

Mammoth defensive tackle Al Woods, all 6'4" 323# of him, is looking to increase his playing time, and if Charles Alexander continues to struggle then Woods appears to be first in line to take his snaps.  Woods came to the program highly touted, but has struggled to live up to the initial 5-star rating.  He is very big, but is not especially quick and has trouble playing low enough to get leverage on offensive linemen.  The result is that while he is very big and strong, he can't seem to bring all that strength to bear as explosively as you'd like.

Eventually you have to forget a guy's Rivals rating and just accept him for who he is.  Al Woods has been a quality team player his whole career and has been a nice depth player.  We wish everyone had All-SEC skill, but thus far Woods hasn't shown it.  He's shown to be a good backup with limitations.  And now that he's a senior, we just have to live with that.

And finally there is redshirt freshman Lavar Edwards.  He hasn't played yet, but now is the time for him.  Edwards is going to have to earn his way into this rotation, and honestly we (the fans) don't know what kind of a player he is right now.  That's one of the things we will be looking for.

Of course, this team has highly touted recruits Josh Downs and Chris Davenport reporting for duty in the summer, so these guys will have to make their hay quickly, or they will be pushed by newcomers.