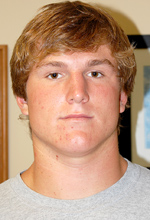 Which brings us to DJ Welter of Notre Dame-Crowley in (of course) Crowley, Louisiana.  LSU accepted his commitment and immediately the message boards lit up with, "He's the next Jacob Cutrera."  Some meant it as a compliment; others meant it as a statement that Welter is limited athletically and likely never to have All-SEC potential.  Sides were chosen and the arguments continue unabated even now.

Welter does not have much video available, but I've watched what is there.  I tend to fall in the middle of the spectrum of opinion.  I do not believe Welter is the next Ryan Baker.  His video just is not nearly as dynamic as Baker's was.  then again, Baker's was as dynamic a highlight reel as you're likely to see.  Baker found the hole and exploded into it to the ball carrier.  Welter goes hard, but he doesn't have Baker's explosion.  He's a pretty strong tackler, though.

I don't think he's going to end up being a national recruit.  I think he's more of a high-3-star-type player.  He's an in-state guy that Les Miles wanted to lock up early though.  I really want to see more film.  I'd like to see how he plays in coverage, and see a little more of his lateral pursuit.