Share All sharing options for: Congratulations to Marcus Thornton and Trent Johnson 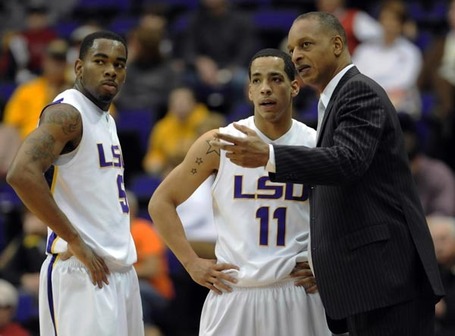 SEC Player of the Year and SEC Coach of the Year honors go to Marcus Thornton and Trent Johnson.  Both were well-deserved.

I know there must have been at least some push for Jodie Meeks to be POY, but Kentucky's late season collapse was considerably more dramatic than LSU's late-season collapse, and despite Meeks' better offensive production, I truly believe Thornton was the better player.

Thornton has been a monster on the boards, one of our best ball-handlers, and a very competent defensive player.  He's also been tough as nails.

Speaking of being tough as nails, how about the job Trent Johnson has done this year.  Yes, we are struggling right now, but he waited until the conference was won before he let the foot off the gas.  Plus, he has a chance to right the ship in the one event that has vexed LSU basketball for most of my life: The SEC Basketball Tournament.  In my memory, LSU has been to multiple Final Fours (both men's and women's), has won multiple College World Series, has won two BCS National Championships, has won countless track and field titles, and has made many other athletic accomplishments.