Share All sharing options for: More on Anthony Zehyoue 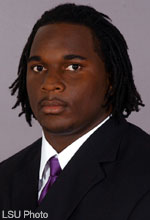 We have mentioned the limbo that former LSU walk-on Anthony Zehyoue is in.  I would like to know how it got this way?  According to Dennis Dodd's article on the subject, Anthony's father, Anthony Sr., has been in the United States at least since 1990, having escaped war-torn Liberia.

Anthony Sr. is a Ph.D and a teacher.  Anthony Jr. is pursuing teaching.  The family is educated and productive.  They have been staying here for almost 20 years under special laws that protect Liberian immigrants and other refugees from war-torn countries, laws which are set to expire very soon if they are not renewed.

This blog takes special care not to get into politics, as the topic can't help but to divide and alienate, but we can bend the rules here because this seems so uncontroversial.  While immigration is definitely a hot-button issue in America, the Zehyoues are not exactly the poster family for bad immigration policy.  Anthony Sr. came to the United States apparently already highly educated, and has raised a productive and law-abiding family that seems to want nothing more than to stay here and to continue to be productive and law-abiding.  Frankly, America needs more people like the Zehyoues.

What's more, they have been able to do so through at least two changes of political leadership in Washington D.C.  From the George H.W. Bush presidency through the Clinton presidency through the George W. Bush presidency (not to mention through more Congressional changes than can be easily counted), there appears to have been little trouble with them getting the authorization to continue staying here.  Now, despite apparently having the help of at least two sitting Senators from the majority party, their immigration status is in serious jeopardy.

The only argument I can see for what appears to be happening is, "Liberia is not as bad as it was in 1990, and while America needs people like the Zehyoues, Liberia needs them more."  Fine, but it's hard to even say that Anthony Jr. is Liberian in any real sense of the word.  He was born in Liberia, but he is about 24 years old and has been in the United States for almost 20 years.  Culturally, he is as American as I am.  One of his siblings was actually born here and is, therefore, an American citizen.  She would not have to leave, but she is a minor and may not have much realistic alternative.

I would say it's a "sad" situation, but it's worse than that.  It's a situation that could be very easily corrected, and there seems to be little reason not to correct it.  After all, why is it America's responsibility to send some of its best to a country they don't want to go to just because they happen to be from there?

I'd like to issue a call to action, but I don't know what kind of action is required, or even what would be helpful.  I welcome suggestions.