Gregg Doyel Can Go Jump In a Lake

Share All sharing options for: Gregg Doyel Can Go Jump In a Lake 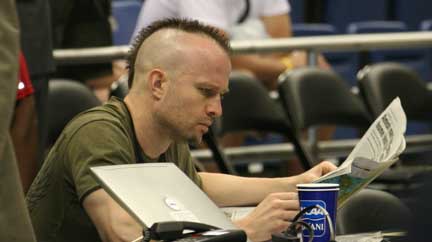 CBSSports.com columnist Gregg Doyel has weighed in on the growing debate of whether the attention-starved and self-absorbed behavior of college recruits is a good thing or a bad thing. Not surprisingly, he thinks it's a bad thing.

At least, it's not surprising until you consider how self-absorbed Gregg Doyel is, and how much he seeks attention. See, as Exhibit 1 for the prosecution, the picture above. Yes, sir, that man considers himself a professional journalist.

You may remember Gregg Doyel as the fellow who penned a column before the 2007 BCS National Championship Game which was, shall we say, unkind to Les Miles and which spoke ill of LSU's chances to win that game. Let us look back:

I don't think Les Miles is very smart. Sorry, I don't. He doesn't look smart, for one thing. He could have been the lead character in Sling Blade. His eyes are too close together. I bet I could jam a thumb over the bridge of his nose and poke both pupils.

Looks can be deceiving, of course. Despite looking dumb, Les Miles could actually be smart. Except he doesn't act smart. And this is why he cannot beat Jim Tressel on Monday night in the BCS title game.

The Fair Use Doctrine prohibits me from quoting much further than that, but really the entire column is a gem. It shows the dangers of pretending you know something you don't know. It also shows the dangers of making bold and dramatic predictions. Sometimes, you're wrong, and you look damn foolish, more foolish even than a 30-something semi-professional wearing a mohawk.

But let's get to his new column, the one about Bryce Brown and other 17-year-olds. As someone who spends a lot of time in juvenile court, I could go on and on telling stories of how foolishly 17-year-olds can act. It's an easy and entertaining pasttime, but in the end it's hollow, because everyone knows that 17-year-olds' minds work differently, in ways that are difficult for full-fledged adults to comprehend. But let's get into the text:

He's playing you for chumps. All of you. Bryce Brown is telling you to jump -- and you're asking, "How high?"

This high school senior, this 17-year-old kid, is holding a press conference on Monday to announce where he will play football in college.

That's right. Shame on you, the college sports fan, for caring about this topic. It is, indeed, a troubling little hobby of keeping up with college football recruiting. But Gregg Doyel neglects to take it to the next logical step, which is to say that paying attention to college sports at all when you're no longer in college is questionable at best. But we all do it, at least, everyone who reads this blog does.

But Gregg Doyel doesn't want to indict everyone. That might piss them off. He only wants to indict that subset of fans who take it far enough to pay attention not only to the 18-23 year olds on the team, but also to the 17-18 year olds who might one day be on the team. It's a distinction that's hard to really explain or justify.

The finger doesn't point only at you, either. It points at me, because my profession is just as guilty. Maybe more so, because we'll be there with cameras and tape recorders. When he names a college, we'll immediately relay the news via cell phone or wireless Internet connection. Whatever the speed, it won't be high-speed enough. Because this is important. This is urgent.

By "It points at me," Gregg Doyel means of course, "It does not point at me." He means, "It points at my profession," which he says in the very next clause. He's saying of course that the media enables egotistical and self-absorbed, attention-seeking behavior. The media, other than Gregg Doyel of course, because Gregg Doyel is too smart and mature to pay much attention to that kind of behavior.

I will let the irony of that sink in for a bit. Gregg Doyel of the "Les Miles looks like Sling Blade" fame, and also of the "It's perfectly OK for an adult who is not Tim Armstrong to have a mohawk." There's nothing attention-seeking about that at all. 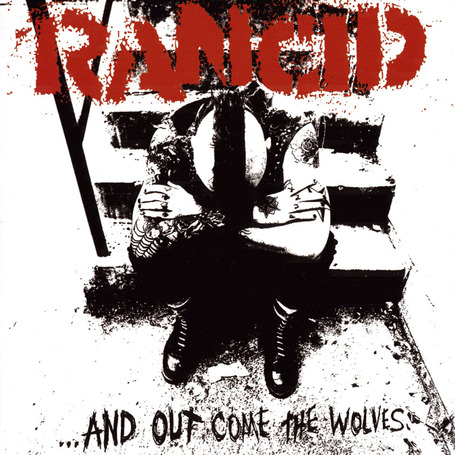 Great album, by the way.

Gregg Doyel then goes on to recap a few famous college recruits and claims them to be busts: Ryan Perilloux, Gregg Little, and Jimmy Clausen, all of whom pulled a couple of recruiting shenanigans. He calls Gregg Little an "arrogant little twerp," and says that Jimmy Clausen's future is in the Arena League.

OK, Ryan Perrilloux is a bust (though he is a bust who may still make it to the NFL based on his ability, plus LSU would not have won the BCS trophy without him, and you saw what happened to us after we had to jettison him), but Gregg Little and Jimmy Clausen are just going to be juniors this year and both have shown promise while playing for pretty bad teams.

Alright, I'm the first to admit that the whole recruiting scene can be troubling, but if your complaint is that everyone gets so worked up over a bunch of young players who sometimes end up not doing very much at the next level, where's the outrage over the NFL Draft? That monstrosity is the biggest and most heavily covered event on the NFL calendar other than the Super Bowl. The media blankets that event much more than it ever has college football recruiting, and the rate of 1st round draft picks ending up as stars is probably even less than the rate of 5-star recruits becoming college stars.

Yes, I agree with Gregg Doyel that these recruits sometimes do bizarre things to seek attention: see Kirkpatrick, Dre and Williams, Willie. That's just to name a couple. Picking on Bryce Brown though? What exactly is he complaining that Bryce Brown is doing?

Bryce Brown is picking a college.

He's mad that Bryce Brown is choosing where to go to school, and that he wants to tell you about it. In a press conference.

Bryce Brown could make a much bigger mark than Greg Little, though maybe stain would be a better word. His recruiting "adviser," Brian Butler, already is being investigated by the NCAA. Some leeches are medicinal and others are not, and the NCAA is trying to figure out which species fits Butler.

Brown is a silly little kid for letting himself be used by Butler, which suggests he lacks the maturity to handle the pressure he soon will face as the most famous freshman in football. Then again, Brown should be immature. He's 17 -- a kid. He's nobody, really. But that won't stop the media from getting flights to Wichita for his news conference.

He's mad that Bryce Brown has an "adviser" of questionable intent. But at this point, it's only "questionable." And really, as long as the process is done entirely within the rules, what really is the harm? Giving the relationship the benefit of the doubt, the kid has an experienced and hopefully intelligent person to tell him what to look out for and how not to be entrapped by coaches' slick sales gimmicks. Looked at that way, Butler could be a very good thing for the kid, as he helps a 17-year old, inexperienced kid navigate a world run by people more than twice his age and sometimes 3x his age or more who are looking to sell a kid like Bryce Brown something for the adults' benefit.

Does no one see how that could be a problem? Does no one see how an "adviser" who knows the ropes of this process could be an immense benefit for a young man who has to look out for himself when no one else out there will, other than his parents who may know less about this sort of thing than he does?

Ultimately, Doyel seems upset that Bryce Brown thinks that Gregg Doyel cares where he goes to college, and Gregg Doyel is above that sort of thing.