LSU 67 - Kentucky 58 And A Preview of LSU vs. Mississippi State

Share All sharing options for: LSU 67 - Kentucky 58 And A Preview of LSU vs. Mississippi State 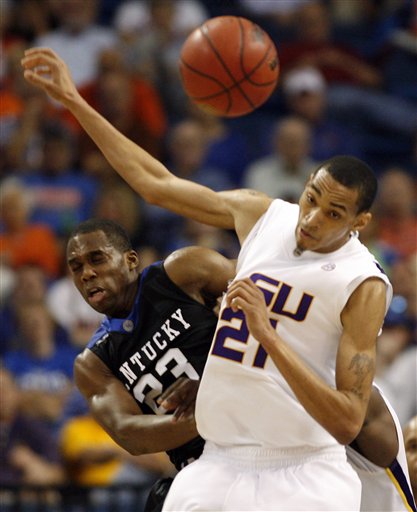 The problem with the tournaments is that everything happens so fast.  This blog is calibrated to go kind of slowly, to the pace of the football season.  It's a jolt to cover two games in a week, but when teams are playing every day, I just can't keep up.

This is especially true when teams are playing every weekday at noon.  I'm sorry, but I'm at work at noon on a weekday.  I got to watch the game on a Yahoo replay on my computer late last night while simultaneously trying to get Little Miss ATVS to go to sleep.  I was multitasking, and I can't say I was able to do either task well.

The game was not the most exciting I've ever seen.  Even though it was a close game, Kentucky rarely seemed to actually threaten us.  After LSU took a 5-2 lead less than 2 minutes into the game, Kentucky only got closer than that to us once.

The game stayed within single digits consistently until fairly late in the game, but Kentucky never made a run at us.  They just traded baskets.  Finally, Garrett Temple, Bo Spencer, and Marcus Thornton made three-pointers on three consecutive possessions to give us a 9-2 run, extending our lead from 9 points to 16 points.  The game was pretty much over at that point, though LSU went cold for a spell and Kentucky cut the lead to 7.  Everyone knew it was over though.

LSU did it by playing very good defense on Kentucky's best players and begging their role players to try to beat us.  Garrett Temple did a masterful job on Jodie Meeks, who has not been less active in a game all year.  Meeks scored only 8 points, and attempted only 9 shots.  His previous low on the season was 11 shots attempted, which he did three times this season, but on those three occasions he scored 19, 20, and 18 points, either by getting to the free throw line or hitting 3-pointers.  He did neither yesterday, going 0-for-3 from behind the arc and attempting only 2 free throws on the night.  He also grabbed only 3 rebounds and committed 5 turnovers.  It was probably Meeks' least effective game of the year (though his 4 for 17 performance with no rebounds against Miami early in the year was also pretty poor).

Patrick Patterson wasn't shut down quite as effectively as that, but even he failed to make his average, scoring only 15 points.  It has to be the first time all season we held a skilled big man to below his season average.

The explanation?  I think good defense is part of the explanation, but I think Truzenzuzex at A Sea of Blue is right that Kentucky was greatly affected by fatigue.  Maybe not so much physical fatigue, but at least mental fatigue.  Kentucky is a team that struggled for any success at all down the stretch of the season.  They pulled it together to beat a feisty Ole Miss team in the first round, but I don't think they had it in them to do it again.  They used up all their physical and mental energy on Thursday.

So now we get MIssissippi State.  This is the team that pushed us to that epic double-overtime win earlier in the season.  It was a win I called, at the time, "the biggest win in recent LSU basketball history."  OK, that may have been hyperbole, or the excitement of the moment talking, though if MSU hadn't had a late-season collapse it would have been closer to true.  At the time, these were two teams on Tournament tracks and battling for the SEC West.  We beat them on their home floor in a game we probably should have lost.  That loss started a streak of MSU losing five of six games, knocking them out of Tournament contention unless they win the conference tournament, before ending the regular season with two wins to salvage something.

One if tempted to say that because MSU is playing their third game in three days, we have the advantage of rest over them.  Not so much.  We only played 7 players last night, and Chris Johnson was the only starter to play fewer than 36 minutes.  He played 32 minutes.  Mississippi State did not tax their starters nearly as much in beating South Carolina yesterday.  Their starters played 146 minutes.  Ours played 181 minutes.  In an easy win against Georgia the day before, no Mississippi State player was on the court for more than 27 minutes.

Our bench is damn rested.  Our starters played a lot of minutes yesterday.  I'm not complaining because we really needed to win that one to get our confidence back, but we will be the team fighting fatigue.