Share All sharing options for: Spring Football: The Wide Receivers 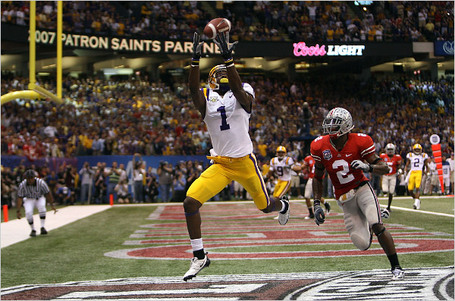 Probably no position on the team has more storylines going into Spring than wide receiver does.  Other positions have more uncertainty, but none have more angles.  Alright, even that's not necessarily true.  The corners and the safeties have tons of stories too, but wide receiver is going to be one of the big spots to watch this Spring.

LSU has the luxury of getting Brandon Lafell back for his senior season.  A couple other receivers in the SEC made more headlines than Lafell, but no receiver was more productive last year.  Lafell led the SEC in receptions, tied for the lead in touchdown receptions, and was second in the league in yards receiving.  He's a true #1 receiver, maybe the best in the conference, plus he also blocks and is a leader and teacher. 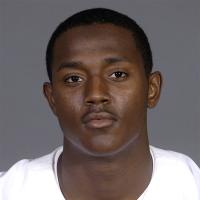 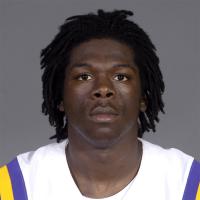 The other veterans returning to the wide receiving corps are junior Terrance Toliver and senior Chris Mitchell.  The world awaits Terrance Toliver's breakout season, and this could finally be it.  After a very promising but expectedly inconsistent freshman season, he was expected to emerge as a big threat last year, but he caught only 22 passes, which was more than double his freshman catch total, but less than was really hoped out of him, and he did not emerge as a big play guy, averaging only 11.7 yards per reception after averaging almost 25 yards per catch in 2007.

He had his most productive games late, however, making several nice catches, and averaging 3 receptions per game from the Bama game forward.  I think, perhaps more than anyone other than Demetrius Byrd, Terrance Toliver suffered from the lack of a quality experienced quarterback last year.  Toliver's still as talented as he was when he was rated as a 5-star out of high school, and it's hard to teach someone to grow to 6'5" or to run like the wind.  Take that 5-star rating with a grain of salt, though.  He played at a run-oriented high school program and did not catch a lot of passes.  He was very raw coming out of high school and has needed a lot of coaching.  It's time for Toliver to put it together, and he gets his opportunity this Spring as the apparent starter at the X receiver position opposite Brandon Lafell.

Chris Mitchell returns to give the team experienced depth.  Mitchell has caught 14 passes in his career, including 8 last year. 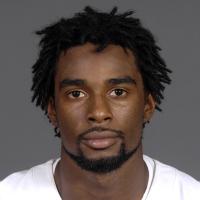 The big story on the wide receiver corps coming into Spring is the reported emergence of redshirt freshman Tim Molton.  This article explains some of the reasons why this young man has emerged, and it's clear that Les Miles and other coaches are not exactly discouraging the media and fans from talking about him:

"I expect him to play a lot of football," coach Les Miles said.

"He made plays every day, whether it was a big catch or a big block," wide receivers coach D.J. McCarthy said. "He made a play every day."

"I watched him during some scout team and realized he has real skill — good speed, niftiness, makes you miss and excellent ball skills," Miles said.

So there you have it.

Well, if the kid wanted high expectations, he has them now.  He was part of the 2008 class of receivers that included Chris Tolliver (no relation to Terrance), Jhyryn Taylor, and Deangelo Peterson.  All of those guys were 4-star players.  Molton was the 3-star.  The afterthought.  The one a lot of fans thought should have been passed over in favor of another receiver.  If the reports from the team are to be believed, he is the best of them all.

It sometimes happens that way.  Sometimes a kid is physically immature, and I think Molton would have qualified there.  He says he's grown half an inch since getting to college (that was only 6 or 7 months ago, by the way), and may not be done yet.  Brandon Lafell was also a 3-star coming out of high school, and here he is a 1st Team All-SEC player.  See also, Ciron Black, a 4-year starter at left tackle who was a 3-star out of high school, and may end up tying the NCAA record for most games started.  Also, Tyson Jackson.  The point of this little tangent is to further disabuse people of the notion that recruiting rankings are everything.  They mean something, but they're not the end-all, be-all.

Of these 4 guys, Deangelo Peterson has the most experience, having played last year on special teams and getting some action at the end of blowouts, but did not catch a pass.  He may be seeing a move to tight end, however, to give us another pass catcher there.

John Williams has been around a while, but has had trouble finding a place to contribute.  He has not gotten onto the field during a game yet, but contributed last year as a scout team running quarterback.  He has bounced from corner to receiver and appears to have settled at the receiver position.  He's a relative of former great LSU running back Dominique Davis, and like Davis he hopes to contribute as a returner as well.

Tolliver and Taylor redshirted last year and hope to contribute this year.

Senior Jared Mitchell is not expected to return to football, instead concentrating on his baseball career, where he could be going pro very soon. 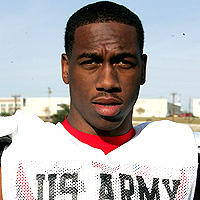 And of course you can't forget about 5-star recruit Rueben Randle, who is fully intending on coming in and contributing right away once he arrives in the summer.  If he can do it with this group of receivers in front of him, he is definitely a special player.  I expect him to come in and displace a few veterans in front of him and be an immediate contributor, but I wouldn't be expecting AJ Green or Julio Jones-like rookie numbers from him.  The depth at LSU in the receiving corps is much better than anything those guys had to face, and I don't think Randle is quite at their level anyway, but he should contribute early.